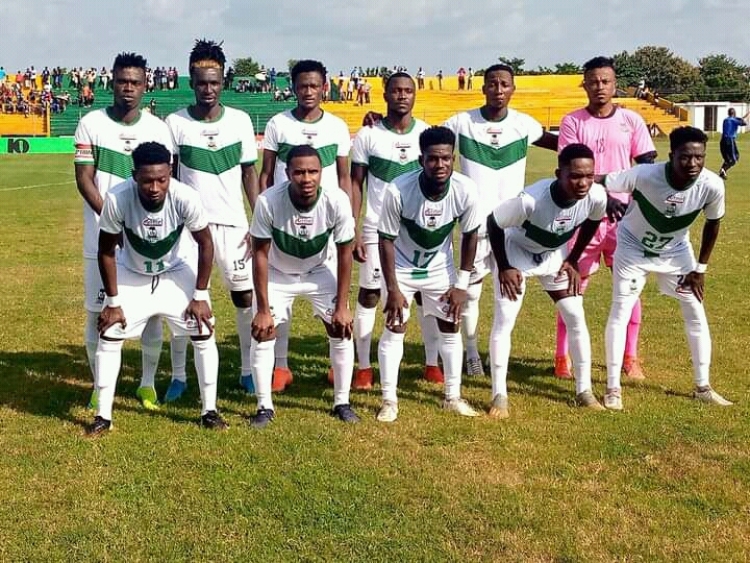 The ‘Insha Allah’ lads netted the opening goal as early as nine minutes after kick off to break the deadlock.

An intent and purposeful start saw the visitors with a quick incursion at goal, which forward Osman Ibrahim nipped on a rebound to hand them the lead.

The home team with a quick response after just six minutes of conceding the first goal.

They were awarded a corner kick on the 15th minute, a sumptuous delivery met the head of Kwame Adom Frimpong who connected with a towering header to level things up for the host.

King Faisal seriously appealled for a penalty on the 18th minute when Osman Ibrahim was brought down in the box but referee Eric Sefa Antwi overlooked that one.

Aduana Stars also broke on a counter in search for the lead but Benjamin Tweneboah who was nearly penetrating his way through the defence was brought down by Wadudu Yakubu who goes straight into the books of the referee.

In the second half, both teams commenced on a lower tone with the travellers being very careful and cautious in their defensive approach to stop the attacking threats of the host.

The ‘Insha Allah’ outfit restored their lead after midfielder Abdul Latif scores with a thunderbolt hit on the 68th minute to get their second of the day.

King Faisal finally sealed the victory on the 90+6 minutes through Ibrahim Osman who nets his second and their third of the game to make it 1-3.

After solid ten minutes of additional time, Eric Sefah Antwi whistle to draw the curtains down in Dormaa. King Faisal FC with a huge win in the end.