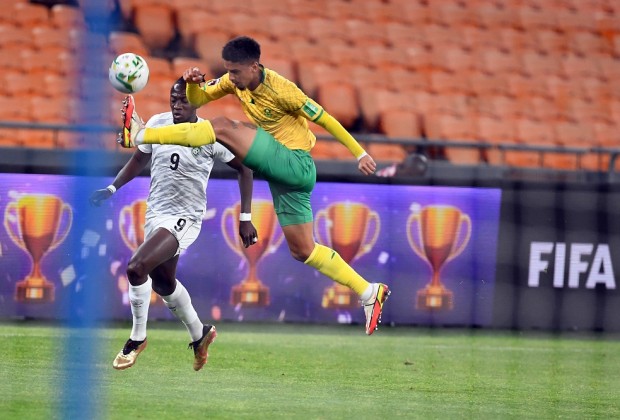 Bafana Bafana extended their lead at the top of Group G in the 2022 FIFA World Cup qualifiers after defeating Zimbabwe 1-0 on Thursday evening.

Following their clash against Ethiopia, Bafana named three changes in the form of Percy Tau, Keagan Dolly and Thibang Phete as Khama Billiat and Ishmael Wadi started in the Warriors line-up.

After an energetic opening, Bafana took the lead five minutes before the half-hour mark when a perfectly weighted cross from Dolly found Teboho Mokoena, who headed in from the back-post.

Bafana instantly went in search for a second goal from a close-range attempt by Tau following a scramble in the area, but the visitors managed to clear their lines on this occasion.

The Warriors began to camp in the opposing half in the latter periods of the first half in pursuit of the equaliser, but their quest didn’t yield the desired outcome.

Nonetheless, Bafana’s dominant spell continued well into the second half as Phete closed-in from a free-kick by Tau before Nyiko Mobbie witnessed a low shot from a promising area blocked.

With full-time approaching, Bafana enjoyed numerous openings from Fagrie Lakay’s low rasping drive to Hlongwane’s header across the face of goal and a long-range drive that touched the upright.

That didn’t matter as Bafana still picked up the win to go three points clear off second-place Ghana in Group G after they played to a draw against Ethiopia earlier in the day.