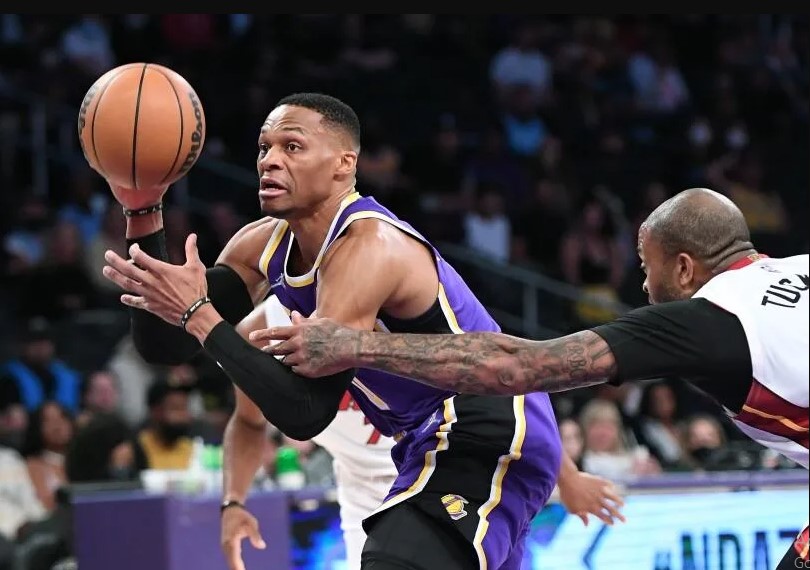 That simply meant the Lakers had to lean on Anthony Davis, Russell Westbrook and Carmelo Anthony more than usual in their time of need.

The Lakers also saw Malik Monk step into a void, doing his part to help Westbrook, Davis and Anthony pull out a 120-117 overtime victory over the Miami Heat on Wednesday night at Staples Center.

It took Westbrook producing a triple-double with 25 points, 14 assists and 12 rebounds for the Lakers to win their second straight overtime game.

It took Davis producing 24 points and 13 rebounds for the Lakers to escape with a win in a game they led by five in the overtime.

And it took 27 points from Monk on 10-for-13 shooting for the Lakers to seal the win.

“I had this role a couple of times last year in Charlotte, the year before that when a lot of guys get hurt and I had to come in and play big minutes and facilitate and do other things that I normally don’t do,” Monk said. “But I work on my game a lot, so I was really prepared for this moment.”

Even in overtime with a 119-114 lead, the Lakers made it hard on themselves.

Westbrook had one of his eight turnovers and Avery Bradley fouled Duncan Robinson shooting a three-pointer. But Robinson made only one free throw.

The Lakers still couldn’t take advantage, Davis fouling Bam Adebayo after he scored. But Adebayo missed his free throw, leaving the Lakers up 119-117 with 23 seconds left.

But with 18.7 seconds left, the Lakers were called for a five-second violation when Anthony failed to inbound the ball, but L.A. held on.

“Trying to find ways to get wins while everyone is getting back healthy,” Davis said. “The last two games have definitely been fun. Guys are having fun. Guys are starting to realize how good of a team we are.”

Westbrook had been cooking late in the fourth quarter, scoring back-to-back baskets, the last giving the Lakers a 112-110 lead with 27.5 seconds left.

Westbrook had an opportunity to win the game, but he missed a three-pointer and Davis missed a follow tip, sending the game to overtime.

Midway through the fourth quarter, Davis, Westbrook and Anthony had not been enough to slow the Heat.

The Lakers trailed 102-95 after Davis scored, forcing the Heat to call a timeout with six minutes 24 seconds left in regulation.

Davis had 22 points on nine-for-19 shooting up to that point. He also had six rebounds and four assists.

Westbrook had a triple-double by then with 19 points, 10 rebounds and 10 assists.

Anthony had a rare off night, making only three for eight from the field for seven points to that point.

Monk was a spark with 18 points on seven-for-nine shooting midway through the fourth.

“Both are minor,” Lakers coach Frank Vogel said of the injures . “Both are day to day. And I don’t know exactly when in the last game it happened, but both reported soreness afterwards and are out tonight.”

Every one of them are rotation players and key to the Lakers’ success.

The Lakers made it difficult on themselves to begin the game, missing their first six shots.

But with the Heat missing their first seven, the Lakers were able to stay in the game.

But with Herro going three for four from three-point range in the second quarter and scoring 15 points, the Heat took a 57-55 lead at the half. Herro started in the second half in place of injured Jimmy Butler (sprained right ankle).

Bradley was one of those players Vogel mentioned as someone the Lakers could turn to.

Bradley was strong for the Lakers in the first half in scoring 14 points and making four of five three-pointers.

But the Heat took an 86-82 lead over the Lakers at the end of the third behind the play of Adebayo.

Adebayo had three fouls in the first half, limiting his time on the court.

But by the end of the third, he had 20 points and seven rebounds.

Unfortunately for the Lakers, they became even more short-handed when Dwight Howard fouled out early in the fourth quarter.

He played just 11 minutes, had three rebounds and no points.