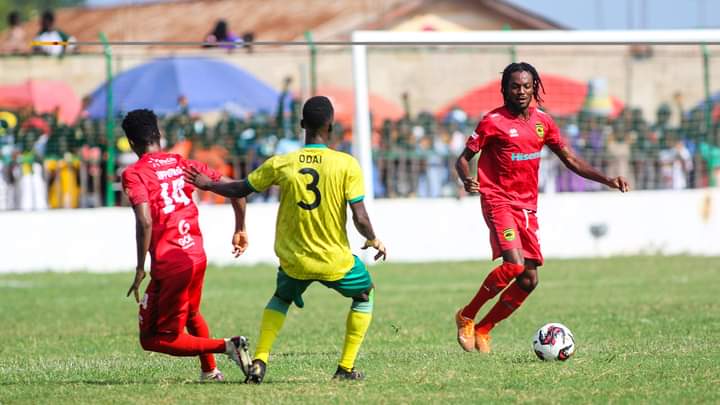 A second half superb strike from Isaac Oppong handed Asante Kotoko another away win in the 2021/22 Ghana Premier League season.

Asante Kotoko have extended their unbeaten streak to three games after pipping Bibiani Goldstars FC 1-0 in the match-week three of the Ghanaian top-flight league at the Duns’ Park.

The Premier League newcomers dominated the first half of the fixture with an intense pressure on the visitors but none of their attempts earned them the opener.

Bibiani Goldstars had a glorious opportunity on the 20th minute through Prince Kwabena Owusu but his strike was fisted out by goalkeeper Razak Abalora as the rebound from Micheal Enu went wide.

The homesters came close again through Charles Kamara Gyamfi on the 32nd minute but his effort was blocked by Andrews Appau.

Bibiani Goldstars failed to make their numerous chances created in the first department count for the opener as it ended in a scoreless draw at the Duns’ Park.

After the break, Asante Kotoko commenced the game on a good note as they managed to register the opener in the just ten minutes from the recess.

On the 55th minute, talented forward Isaac Oppong netted the opener for Asante Kotoko with a sumptuous strike which saw goalkeeper Yaw Ansah Fufro crawling in his net.

Asante Kotoko looked very calm after opening the floodgate as Sheriff Mohammed was introduced as replacement for Fabio Gama.

Bibiani Goldstars kept knocking for the equalizer but Asante Kotoko back line was resolute with their fearsome attacks in the last fifteen minutes of the game.

Striker Prince Kwabena Owusu had a golden opportunity to level the score for Gold Stars FC but his effort was brilliantly saved by goalkeeper Razak Abalora.

Asante Kotoko held on the 1-0 lead to emerge as victorious in the cagey encounter at the Duns’ Park.