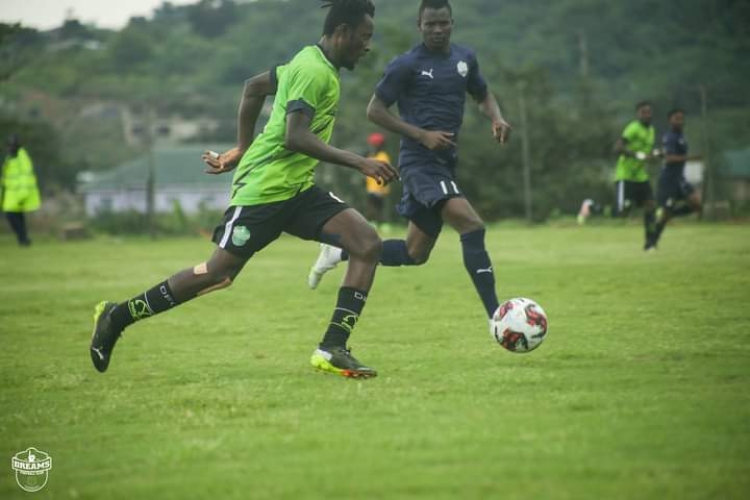 Dreams FC plays in Dawu for the first time this season after inflicting a 3-1 victory over newly-promoted side Accra Lions in match-week 3 of the ongoing season.

Coach Karim Zito made four changes in today’s line up having missed the service of Abdul Fatawu Issahaku and Philemon Baffour who are currently with the Black Stars.

Goalkepper Solomon Agbasi also missed out due to injury and his position was taken by second-choice Augustine Koomson.

The homesters with an explosive start here after Victor Oduro took on his marker on the right but his long range effort was saved by Frederick Asare.

Accra Lions also made their first dangerous attempt at goal. Rauf Salifu sent a dangerous free kick which resulted in a glorious opportunity but goalkeeper Augustine Koomson pulled a great double saves to rescue his side from the situation.

Huzaif Ali makes his first start to the season count after hitting the back of the net with s close range finish to put the host ahead after 14 minutes.

Six minutes later, Dreams FC doubled their lead through Agyenim Boateng Mensah who combines with Huzaif to sumptously plot at the back of the net.
But the visitors responded quickly through marksman Rauf Salifu who scored on the 21st minute to reduce the deficit, notching his second of the season.
In the second half, both teams came in with some quick substitutions especially the visitors hoping to turn things around in the early stages.

Accra Lions came into the second department on a lower tone with inexperience being their major problem as they at a point struggled to even unlock the Dreams FC defence.
Agyenim Boateng Mensah again scored on the 68th minute to restore his side’s two goal lead, completing his brace and marking his third in the new season.
The ‘Still Believe’ lads kept on with their attack to get more of the goals but the resolute backline of Accra Lions led by skipper Richmond Ankrah were always well organised to tidy up their zone.
It ended 3-1 in favour of Dreams FC who have recorded consecutive victories for the first time this season. The travellers woes continues.