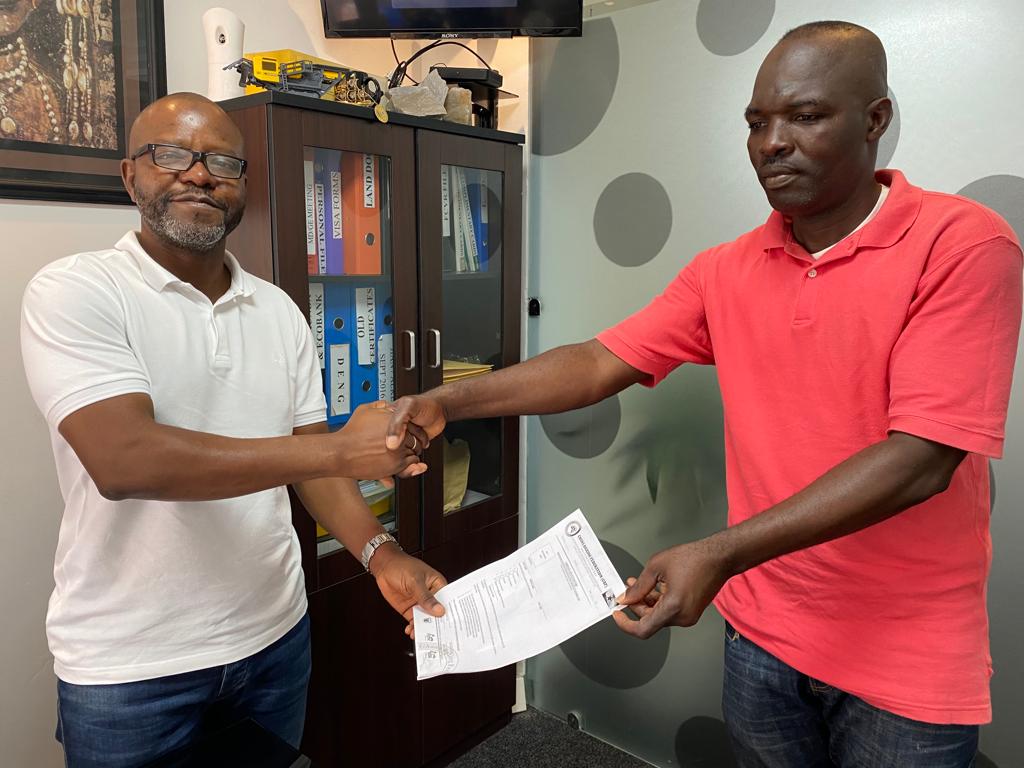 Alhaji Abdullah Pangansur Issaka, Managing Director of top Ghanaian freight forwarding and logistics company, Freight Consult and a keen boxing enthusiast has formally picked forms to contest for a role as executive board member in the administration of amateur boxing in this country.

Alhaji Issaka who has been supporting a number of boxers and boxing programmes in the background believes its time he puts his vast knowledge and resources at the disposal of the Ghana Boxing Federation (GBF) as a member of the executive board at the upcoming elective congress next month.

This became official on Friday when his application forms was picked on his behalf by boxing coach, Fatai Issifu who later handed it over to the man himself and Alhaji Issaka immediately made his vision to help revive Ghana boxing clear that he is coming on board to help develop the sport he so loves and with a determination to help instill discipline into young boxers.

“I want to contribute to the progress of Ghana Boxing because of the passion and belief I have in the sport and I sometimes lament how we have not been able to perform creditably on the world stage. This has to stop and we can only do that by investing in discipline, hardwork and commitment, I’m here to help ensure that,” Alhaji Issaka told Dornu’s Corner after picking his forms.

“I will also bring on board a lot of corporate bodies to sponsor us, way back in 2015 I helped the legend himself Azumah Nelson get many sponsors for VIP Fight Night. I am in the corporate world and I can convince a lot of them to come and support us,” he added.

For starters, the Freight Consult chief has been involved in boxing for nearly a decade and has over the years silently supported former world champions, Joseph Agbeko and Isaac Dogboe as well as the annual Salafest Boxing show and a host of amateur boxing prospects.

Further, he has already acquired a vast land on the Shai-Osudoku hills to build a multi-purpose training school for boxers in Ghana, modelled on the football academy system which has massively benefited many African countries.

“There is no doubt about the talent potential when it comes to boxing in this country but unfortunately we lack the facilities and the requisite technical know-how to really develop them into their full potentials, that’s why I have planned to build an academy strictly to teach and train boxers. It will be like boarding school with dormitories and classrooms, that’s the legacy I want to leave for Ghana boxing,” Alhaji Issaka told Sportsinghana.com about three months ago.

The GBF should have had the elective congress last year but was postponed due the coronavirus pandemic but in a communique release November 2, 2021 signed by the Secretary General, Patrick Cofie, the “elective delegates congress is slated for 18 December, 2021 at the Press Centre of the Accra Sports Stadium.”

Positions up for grabs are President, 1st Vice-President, 2nd Vice-President, Treasurer and two Executive members to form the governing board of amateur boxing in Ghana. Accordingly nominations of interested persons for the various positions were opened on November 8 through November 25 ahead of the congress.

Alhaji Abdullah Pangansur Issaka is confident with him on board, the opinions and contribution of former boxing greats will be sought and opportunities given for them to interact one-on-one with the current national boxing team members, all aimed at propelling the Black Bombers to win more medals for Ghana at international competitions.

“Another thing I will like to bring on board is involvement of the legends in everything we do, if even for them to just motivate and give little advices to the young boxers,” he stated.

“Somebody like Azumah Nelson, he reigned as world champion for ten years which is almost impossible to repeat. Imagine himself speaking to the boys about it. We need our legends and I will personally push them to join us,” Alhaji Issaka affirmed.