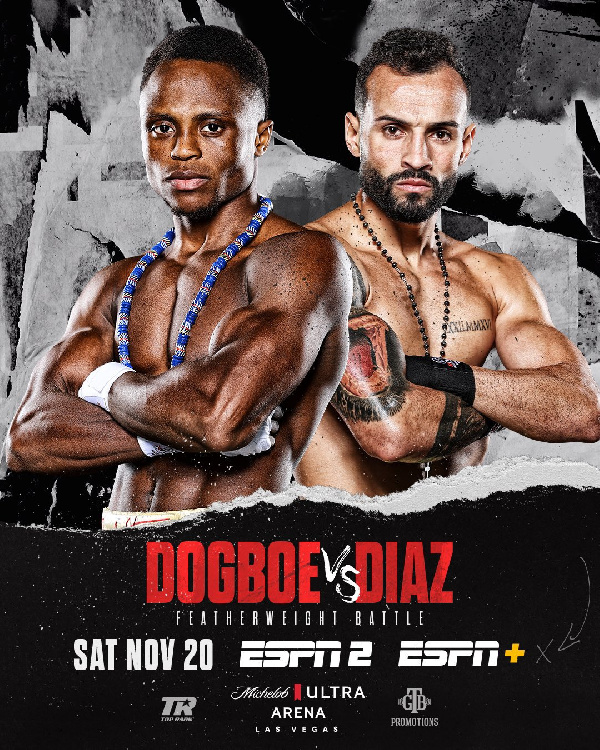 The Ghana Boxing Authority led by astute President, Abraham Kotei Neequaye have strongly put forth support for former world champion, Isaac ‘Royal Storm’ Dogboe (22-2, 18 KOs) as he intensifies preparations for his next fight this Saturday against  Puerto Rica’s Christopher Diaz (26-3, 16 KOs) whose last fight was a TKO loss back in April 24 to the only man to defeat Dogboe, Emanuel Navarrete.

Below is the full press release by the country’s fight sanctioning body:

The Ghana Boxing Authority (GBA) wishes Isaac “The Royal Strom” Dogboe who is the current NABF title holder, the very best of luck in his upcoming fight against Christopher Diaz scheduled for 20th November, 2021 in Las Vegas, Nevada, USA.

The GBA has been monitoring and evaluating his training regime and has no doubt in his intuitive capabilities to defend the title.

The GBA is confident that Isaac Dogboe will successfully defend the title and continue his steady rise towards winning many more success in the ring and to become first contender to the WBO featherweight title ranking.

The GBA President, Abraham Kotei Neequaye and the entire Executive Board Members, well- wishers and the Ghana Boxing Supporters Union wish Isaac Dogboe the very best in this championship bout.

As the statutory body in charge of regulation, promotion, organisation and development of boxing in Ghana, it’s imperative to support you both physically and spiritually to win this fight for our homeland Ghana.

The GBA is by this goodwill message wish to encourage all Ghanaians especially the boxing fraternity to remember Isaac Dogboe in their prayers to help him triumph on the day of the fight.

We Believe in You.Go and make your homeland Ghana proud.