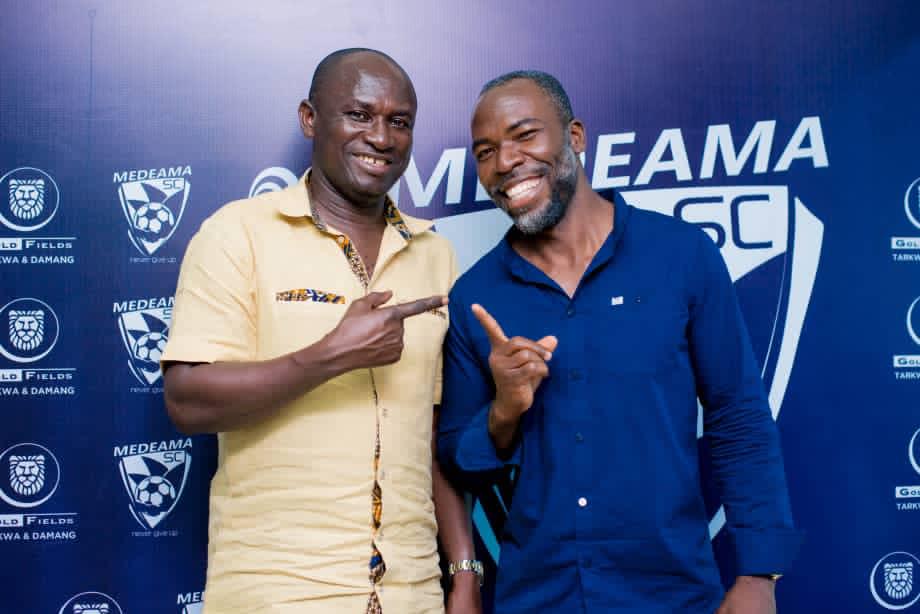 Nana Adu is the founder of Linked Sports Business College, Linked Sports Foundation and Business in Ghana and Uk, down the pecking order, he has over 20 years experience in local football, embodied with his association to Ghana Football Association’s technical directorate involvement.

Nana Adu is a product of Kotobabi’s Power Lines FC and Tema Hearts Babies. His career as a footballer came to an abrupt end due to an injury.He later formed  a colt and 3rd divisional club called Total Sports Academy, which was in existence for over a decade.

In 2010, he left Ghana to the UK and bought Takoradi’s second divisional club, Great Obiri Fc, where he changed its name to Oil City Sporting Club.

Nana Adu was introduced to other members of  Medeama Sporting Club management yesterday on his appointment.

In a statement, Nana Adu said:” I am honoured and excited to be given this opportunity to work with a reputable football club like Medeama Sc, as the club’s business development manager, club consultant and special assistant to the club’s President and founder, Mr Moses Armah Packer, especially at a time when there is so much focus globally on the development of football business, more broadly, the club’s proud title sponsor, Goldfields’ new stadia facility under construction.

“I look forward to working collectively with both the club’s directors, board members, technical team, the playing body, and the cherished Medeama fans, including all old and new stakeholders for the success of the club, and to leave a lasting positive legacy for the future.

“I believe this appointment represents another significant and exciting step forward for the club, Medeama Sc, Never give up”

Nana Adu expressed profound gratitude to both old and new staff of the club. He highlighted  how hard change is, especially when one thinks he/she is in the comfort zone.

He went ahead to plead the support of everyone to work in the best interest of the club, since one can only remain in football business, and be employed in the club if each person devotes  his/herself to better the current club standard, both on  and off the pitch business.

Nana Adu advised, this is the time to close the gap and set a pace for fellow clubs to follow.

“If we believe in the dream, work a little harder and extra smart, we can do it and make a difference” Nana Adu lastly said.

Mr Moses Armah delved more into the appointment of Nana Adu and said:” We  recognize that there is more work to be done as a professional football club, especially our new stadium which should be ready next year God willing for the 2022/23 season.

“We have chosen him due to the vast experience and reputation Nana Adu has in the football industry, our commitment and passion to improve our standards, lives, embrace innovation and create opportunities for the talented youth players in the region, the country and most importantly to remain an essential source of sports entertainment organization in the Western region, especially Tarkwa for years to come”

Mr Armah disclosed meeting Nana Adu in 2017, where the sports development guru has been working behind the scenes for the club till now.

“We know he has the qualities and the experience we need if we want to also do football business. His role cuts across all departments in the club, and he also doubles as my personal assistant, the club requires his knowledge and experience to drive it across for the success of the club.

“I noticed the club requires someone who understands football business intrinsically, passion for football, especially Medeama Sc, with genuine empathy which we believe  his inclusion to the current management, can achieve a lot for the club.

“We know that football has the power to unite the cherished fans in  Tarkwa community and the entire country by bringing them together to remain in business. We have a clear and focused vision on how we will do that, set our academy, improve the standard and operation, create opportunities within football by breaking down barriers, so we can have an inclusive game and sustainable football organization that we can all be proud of with benefits.

Rose Linnet Osei Bonsu, Vice President and wife of Mr Armah, also threw her support behind the appointment, with strong belief of Nana Adu restructuring the club to become a profitable organization in future.