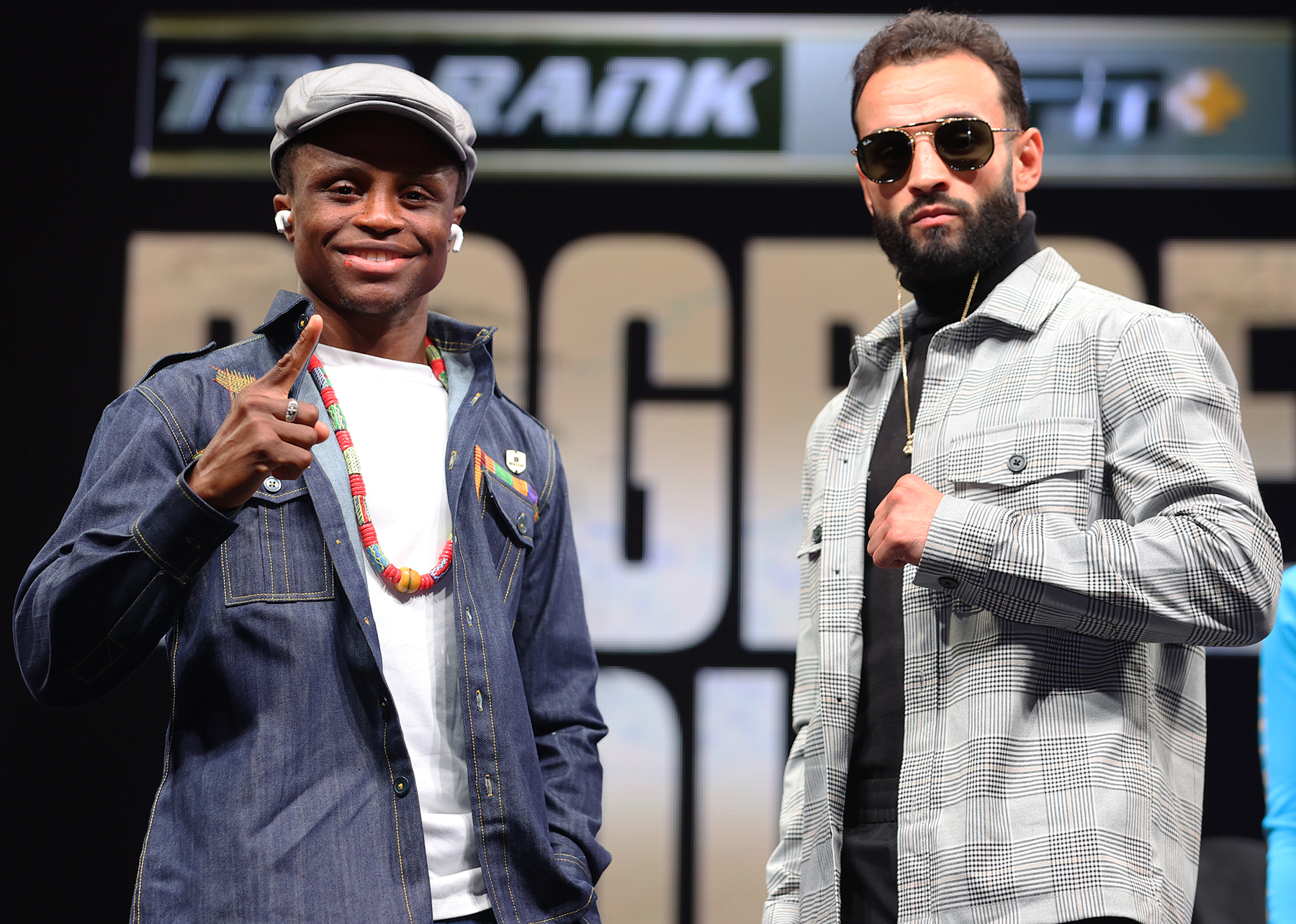 Presented by Top Rank and TGB Promotions, Crawford-Porter will be a Top Rank PPV exclusively on ESPN+ in the United States at 9 p.m. ET/6 p.m. PT. CLICK HERE to view the ESPN+ order page.

At Thursday’s undercard press conference, this is what the fighters had to say.

“You can be sure that I am very well prepared and I will bring the win to Brazil. I had the best training and the best sparring. I trained hard and I sparred hard and now I bring the title to Brazil. My last fight was against a Russian {Artur Akavov} and a very tough opponent. He had never been knocked down and I took him out in the fourth. I am prepared and no one will take this opportunity from me.”

“Not many people have seen me because I fight in Canada a lot. I am ready to fight. I have prepared for this and here I am on the stage in Vegas. If we have to box, we will box, and if we have to fight we will fight. I am ready for everything.

“I came to Vegas to train and I learned a little bit from each boxer I trained with. Coming to Vegas early I got to adapt and it’s been great. This is a big opportunity, and opportunities don’t happen every day, and when you get them, you’ve got to take them. We have been working many years for this.”

“I am here to show the world ‘Qazaq Style.’ I want to put Kazakhstan on the map of boxing, not like all the other stops. My goal is not only to be a one-division champion, but to be a four-division world champion.

“This is a good fight for me, and when I win, I will be closer to a world championship, and that’s why I took the fight. I feel good at middleweight. Super middleweight was too big for me.”

“I feel like I’ve been putting in the work and it’s really showing. It was more difficult than I thought it would be (coming back from COVID), but I just kept training and it’s been good. In the gym (Robert Garcia Boxing Academy), there are a lot of good fighters and we are sparring a lot with a lot of different styles and just continue to learn. This (fighting on a PPV) has come a lot sooner than I thought. I put in the work and good things are coming. I am different than a lot of fighters, I have a lot of skills and I’m going to show that Saturday night.  He’s an aggressive fighter – I am prepared for anything – so I’ll be good.”

“The losses to Navarrete helped me to see things clearly and for me to start paving my own way. Boxing has taken me places and got me to meet my new team. My new team made me realize boxing is not all about knockouts – it’s a thinking man’s game. Now I am trying to think a little bit more, enjoy the atmosphere a little bit more. With my new team – Perfecting Athletes – I can eat and drink on the day of a weigh-in and that is crazy, whereas before on fight week I’d be looking like a skeleton.

“Diaz is a tough man. We know he is an energetic fighter and he will throw overhands and uppercuts. It will be fireworks. Let it begin.”

“{The Navarrete fight} was a great fight. I pushed through every round, and {in the 12th}, I went down three times and I got up three times like the warrior that I am. On Saturday, every time I hit him, he will feel it, and let the best man win.

“Two weeks after the last fight, they made me the offer to fight Dogboe, so I went back to the gym – let’s get it! I am here to fight the best. Will you go the 130 and fight Ito? Yes. Will you fight Navarrete? Yes. Will you fight Dogboe? Yes. So they send me the offer and here I am. Being the warrior that I am I will continue to get opportunities. It will be a great fight on Saturday night and the best man is going to win.”

“The kid is tough, and when we first fought, I have to give him credit. He was a tough competitor and had no quit in him. He’s got 12 wins and a couple losses, so that’s a winning record to me, and I’ve never turned down anybody, so let’s do it. I got pushed up quick with the {Oscar} Valdez fight. I went from a nobody to a featherweight contender. I’ve held my own against the best in the world. You all know I can fight, and I bring it every time, and it’s going to be a tough fight for sure.”

“It’s always been on my mind since the first loss and it’s personal to me. I’m not the same fighter I was four years ago. I was barely an amateur transitioning into professional and now I feel like I’m ready for this. There is no animosity – it is just a loss that has stayed in the back of my mind.  You can expect fireworks. I am going to go straight at him and do what I’ve got to do to win.”