Teofimo Lopez vs George Kambosos: The longshot odds ahead of the weekend 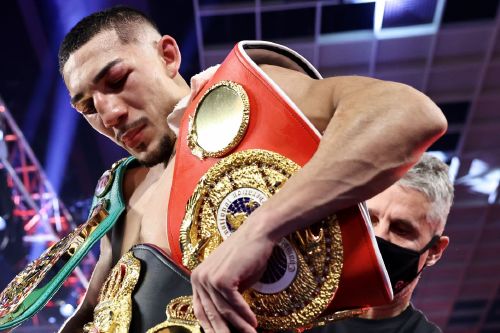 Both fighters are undefeated going into the fight although Lopez makes the first defence as unified champion against a fighter competing for his first world title.

In reality, Lopez is the undisputed lightweight champion but instead on paper, he is the unified titlist with the WBA, WBO and IBF straps.

Vasyl Lomachenko was elevated to WBC Franchise champion before he lost to Lopez with Devin Haney being upgraded from interim titleholder to world status. That’s enough of mentioning titles – for now.

When, where and how to watch

How to watch: DAZN

You’re only as good as your last fight and both men recorded impressive wins. The challenger Kambosos – of Australia – outpointed former IBF featherweight world champion Lee Selby via unanimous decision to win an eliminator for face Lopez.

“The Takeover” himself also won, but against all odds with a points win over the legendary Lomachenko.

Despite being given next to little chance, Lopez took advantage of Loma’s slow start and did something nobody thought anyone could do – outbox the boxer.

It will be 13 months since that famous victory, the same amount of time since Kambosos last fought against Selby as well. The delay of the fight was not only down to injuries and Covid-19 getting in the way but also because of a TV dispute with Triller – a streaming platform that originally won the purse bids to broadcast the event.

However, a messy settlement means the second highest bidder now gets to stage the lightweight encounter and that is Eddie Hearn’s Matchroom Boxing.

While Lopez is odds on to deliver victory, we take a look at some of the longshot outcomes of a contest where both fighters are equally inactive.

Lopez has a point to prove. Devin Haney is calling him out for an undisputed showdown, Vasyl Lomachenko is chasing a rematch and Josh Taylor has traded words with him.

The 24-year-old has made it clear that he has no interest in facing Lomachenko again, instead focusing on the new blood in boxing. Taylor is undisputed champion at 140lbs, something Lopez fancies especially with a win putting his name in the record books as a two-division world king who unified both weight classes.

Looking to make a statement of intent, similar to what he did against Richard Commey to win the IBF lightweight strap in 2019 – via TKO in round two – he will hope to make light work of Kambosos.

However, dusting off the cobwebs, it may take Lopez longer than he anticipated to get his rival out of the ring and at odds of 14/1, round 10 looks a tasty pick.

Kambosos to beat Lopez in rounds 1-3

If Kambosos wants to win and ensure he is not robbed of a dodgy scorecard by the judges, then he has to start quick and be the aggressor.

Not only is Lopez a good boxer – as we witnessed against “Hi-Tech”, but he has a dynamite punch. The undefeated Australian has to be wary of the power Lopez possesses but his best chance may be to play fire with fire and attempt to put the champion on the backfoot – something which hasn’t happened in his pro career just yet.