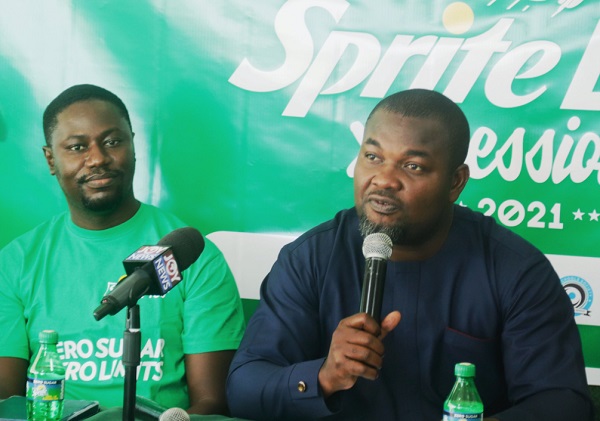 The final of this year’s Spriteball Championship has been fixed for December 24, 2021, at the Aviation Social Centre in Accra.

Unlike previous editions, the upcoming event which has been christened Spriteball Xpressions 21 will also involve a musical contest between high-school students.

Addressing a press launch of the competition today in Accra, the CEO of Rite Sports, Yaw Sakyi Afari said the basketball competition will be competed for by only male students who won’t represent their various schools but rather the regions their High Schools are located in.

He said students will compete in regional qualifiers on a community basis before the best players will be selected from that event to represent the region in the final.

The regional contest will be between four community-based teams in each of the Western, Central, Eastern, Volta, Greater Accra and Ashanti Regions.

The inclusion of music into this year’s event is in line with the Sprite (headline’s sponsor) brand focus on music.

The Market Execution Manager of the Coca-Cola Bottling Company Ghana Limited, Elijah Afutu Nartey said the Sprite brand believes in unearthing talents which is why it backs the music competition.

He assured that his outfit will continue to collaborate with Rite Sports to achieve this aim.

The preliminary rounds of the music contest will be held online to select 12 finalists (two from each region) for the December 24 final.

The 12 finalists will perform on stage for a three-member judging panel which includes radio host Lexis Bill and music producer Richie Mensah to decide the winners.

The winner of the music competition gets the golden opportunity to work with Richie’s Lynx Entertainment to produce a theme song for the Spriteball competition.

All participating teams and individuals will receive products and souvenirs from Sprite.