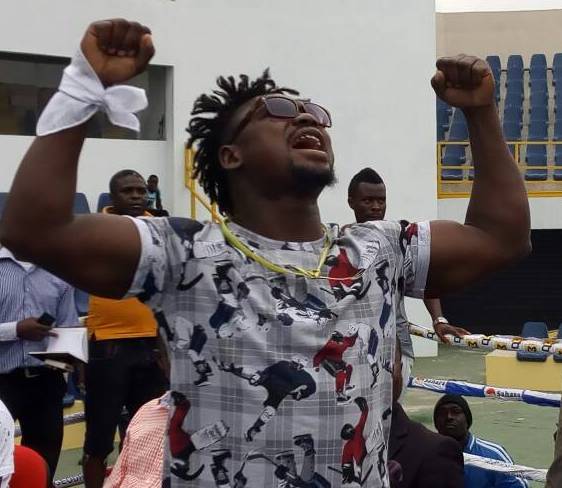 When Bastie Samir dominated and knocked out the enigmatic Braimah Kamoko (Bukom Banku) in the seventh round in that epic boxing tie at the Bukom Boxing Arena on October 21, 2017, many Ghanaians were deep in their conviction that the victory would catapult the winner to instant fame. It did – rather effortlessly.

Indeed, it was Banku’s solitary defeat (30-1, 23 KOs) in his professional career.

Ghanaians also opined that Bastie, known as the ‘Beast’, would shoot into global prominence and possibly draw some big fights that should culminate in a world title shot.

Dejectedly, that is not to be. Or, put more appropriately, that has yet to materialise. And, the ‘Beast’ is gradually melting into obscurity – a situation that has stunned many of his followers and Ghanaians alike.

With a fight record of 20 – 19 by way of knockout and a draw, the 35-year-old Bastie is certainly not a boxer to be marking time. Sadly, that is the case.

At the weekend, the Times Sports got in touch with the undefeated Bastie, a two-time Olympian, to find out what has kept him on the quiet, all this while.

Times Sports: After demolishing BukomBanku, that propelled you to instant fame and afforded your career a strong launching pad, many expected you to have inched closer to a world title shot by now.

Bastie Samir: You may be right. That win over Banku was as crucial as important. It gave my career a huge lift. My name was all over the world. Despite the fact that I had fought 17 times and had gone unbeaten ahead of that fight, I wasn’t that popular until I silenced that braggart.

Unfortunately for me, I have not had big fights coming my way to shoot me to the level I wanted to be. I’m disappointed myself that I have not gotten to where I wanted to be; but all is not lost yet.Once my career is not over, I will certainly bounce back!

TS: How many bouts have you fought since the momentous victory over Banku in 2017?

BS: I have fought three times, winning all by second round knockouts; one of which was in 2020 against Nigeria’s Sunday Ajuwa. Earlier in February 2019,I took on Lokossou Raoul of Benin, whom I crushed in two rounds in an international catch-weight contest. Unfortunately, I have not been in action since then. I must add that stunning Covid-related annulments of sporting activities in the country and around the world made 2020 particularly a sterile period for boxers.

TS: You have a drawn result in your fight record. Who was that guy?

BS: Y-e-a-h! (Laughs). He is a Cuban by name Lester Gonzalez. He’s very strong, tough and unyielding boxer. Our fight on April 2011 was adjudged a split draw. It was full of action from the get-go to finish.

TS: Time is not on your side. Are you sure you can win a world title before hanging your gloves?

BS: Certainly, I’m highly optimistic about that dream. As I speak now, I’m rated 15th in the WBA light heavyweight division, which means that after two or three successful fights or so, I can get a shot at the title.

TS: How soon are you fighting again?

BS: With all things going as envisaged, I will be in action on Boxing Day December 26, next month, against an unnamed foreign opponent. I have been training very hard ahead of the bout under Coach AkwasiOforiAsare. That’s what I can tell you for now.

TS: We hear you are not under any promotional management now. Why?

BS: For now, yes. Why? I cannot really tell. But I’m all-too ready now to go under a management that would also understand my vision. We need to think together, have a mutual agreement and goal, because I’m hungry now than ever to go all out for global fame and recognition. I must add that whoever is coming for me must not listen to what other promoters in Ghana say about me. They should be free to come and let’s reason together for the good of the sport. I promise that whatever is spent on me would be worth it – and not be in vain.

Having said, I’m appealing to sponsors to come on board and support me to bring glory to the country. I’m still undefeated and I’m a strong brand to invest in. Let me use the opportunity to thank a few people who have been phenomenal in keeping me going – especially during the early tough days of Covid. They are the Doobia family, Glo Ghana Limited, Alhaji AbdulaiYakubu (former Chief Director, Ministry of Youth and Sports), Lawyer John Kumah, Kobby Barlon, Alhaji Inusah Sally and national boxing team chief trainer, Akwasi Ofori Asare.

TS: In 2016, your younger brother Issah and you were signed on by the famous Golden Boy Promotions. What became of it?

BS: It’s a long story. I don’t want us to go into it. What I can say briefly now is that, we weren’t comfortable with it and had to opt out later.

TS: Would you want to give BukomBanku a rematch?

BS: (Laughs). You know he wouldn’t come. I opened the door widely for him long ago, and even begged him to fight me again, but he declined. I would have sent him to his early grave. He was smart. It was a big trap. I think he was advised not to try.

TS: Many people want to know where you got your nickname ‘Beast’

BS: It was given to me by the American media when I relocated to that country in 2008. They say I fight like a beast when in the ring. The truth is that I’m ruthless. I’m merciless. I’m always ready to kill and end the fight as early as possible when the opportunity presents itself.

TS: Do you take delight in punishing your opponents?

BS: Not really. But I believe in finishing my fights early when the chance opens up, and if I have to punish you to achieve that target, so be it!

TS: What do you have for your fans next year?

BS: Hopefully, if all things go as planned, we should be getting close to a title shot as I’m eager to win all bouts that come my way.