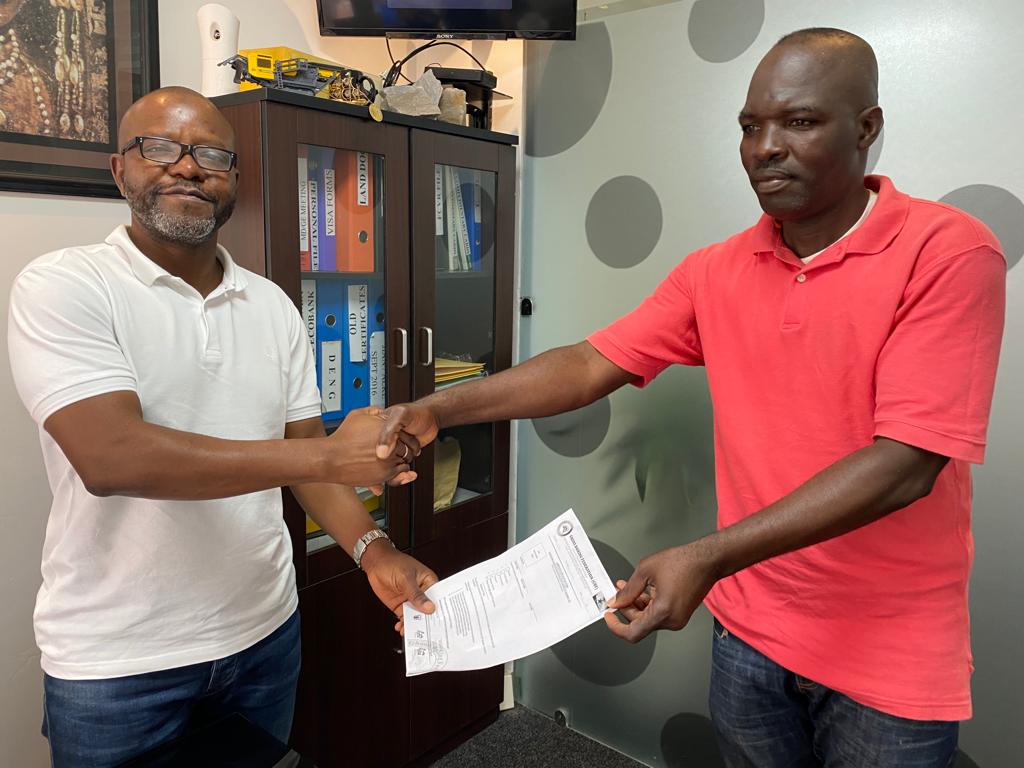 Abdullah Issaka Pangansur, Managing Director of top freight forwarding and logistics company, Freight Consult on Wednesday formally submitted completed forms to contest for the position of executive board member of the Ghana Boxing Federation ahead of the December 18 elective congress but the astute businessman is already advanced with plans for construction to begin for a multi-purpose training school for boxers in Ghana, modelled on the football academy system which has massively benefited many African countries.

A big boxing enthusiast and underground financier of world champions Isaac Royal Storm Dogboe and Joseph Kingkong Agbeko as well as some boxing clubs, Alhaji Pangasur explains that he is not doing this because of his bid for the GBF post, rather he envisages it as the best avenue to really tap into Ghana’s huge reservoir of boxing talent, develop them by teaching modern techniques and tactics and the West African country could be winning multiple medals in future Olympics as well as world titles by pros.

“There is no doubt about the talent when it comes to boxing in this country but unfortunately we lack the facilities and the requisite technical know-how to really develop them into their full potentials, that’s why I have planned to build an academy strictly to teach and train boxers. It will be like boarding school with dormitories and classrooms, that’s the legacy I want to leave for Ghana boxing,” Alhaji Pangasur disclosed.

“It’s so bad that a boxing rich country like Ghana has not won much more medals at the Olympic Games, it’s too bad and we need to change that. Watching our boxers, they often lack the tactical acumen to complement the raw talent, a full time training school will help in moulding the raw talent into a technically and tactically astute boxer ready to beat the world just as football academies have done so well,” the Freight Consult CEO explained.

And he is not just planning, long before he even conceived the idea to be involved in GBF affairs, Alhaji Abdullah Issaka Pangansur already secured land for the purpose, just outside Accra where he indicates a modern edifice will be built and installed with modern facilities and infrastructure to house potential students where they will combine boxing training with classroom education.

“Everything is in place, we already have the land somewhere around Shai Osudoku Hills. We will scout for young potentials all over Ghana and recruit a set number to the school every year. They will stay in the school where aside training to be boxers, they will also take classroom lessons in two subjects, English to teach them how to read and write and IT which is needed in all spheres of life in this 21st century. We want to prepare them to be the best professional boxers they can be,” Mr. Isaaka said.

“We won’t charge them any fees, everything will be free. All they have to do is be disciplined and focused, if you are not disciplined we will sack you because I believe discipline is key for success in not just sports but life in general,” he said.

“The only way we shall benefit anything from them is to sign a contract that when they start earning big as pros then they can pay some percentage to the school, not to me personally but the school so it can be re-invested to sustain the project and recruit more beneficiaries,” he said.

The boxing academy project is entirely his personal project, but Alhaji Pangasur believes working in partnership with the governing body of amateur and juvenile boxing in this country will be to the good of everyone, hence the decision to get on board the Ghana Boxing Federation.

“I want to contribute to the progress of Ghana boxing because of the passion and belief I have in the sport and I sometimes lament how we have not been able to perform creditably on the world stage. This has to stop and we can only do that by investing in discipline, hardwork and commitment, I’m here to help ensure that,” Alhaji Pangasur said after submitting the forms to GBF General Secretary, Patrick Anyidoho Cofie at the Accra Sports Stadium.

“I will also bring on board a lot of corporate bodies to sponsor us, way back in 2015 I helped the legend himself Azumah Nelson get many sponsors for his VIP Fight Night. I am in the corporate world and I can convince a lot of them to come and support us,” he added.