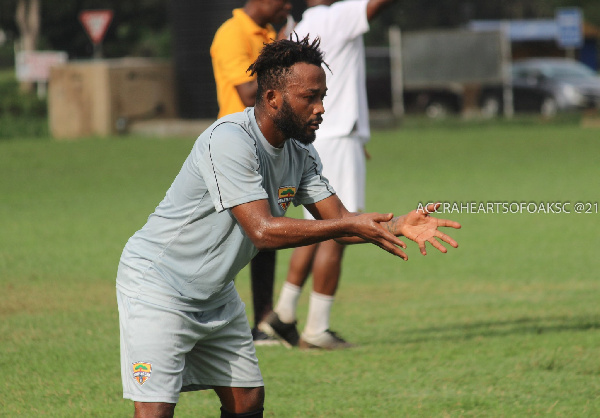 New Hearts of Oak midfielder, Gladson Awako, has opened up on the reason for his long absence from the team since signing in August.

Awako, who is yet to make an appearance for Hearts this season, only returned to training on Tuesday, November 22, after being absent for over two months, citing personal problems.

The former Great Olympics captain, in his first public interview since his long absence, blamed his no-show on a battle with an upset stomach.

Gladson Awako has started training with Hearts of Oak

“I wasn’t well. Before God and man, I wasn’t well. My teammates, team manager and coaches well all aware I was suffering from a serious running stomach,” he told Accra based 3 Sports.

“The club granted me permission to go and treat myself during the period.

“I never said anything during that period, and the talk of spiritual attacks should be disregarded.

“The reason why I’ve not yet played a game since I joined Hearts of Oak is because I was not physically fit. It’s not spiritual,” he added.

Hearts of Oak are preparing towards their CAF Confederation Cup playoff game against Algerian side JS Saoura on Sunday in Accra, but it is unclear whether or not Awako will feature.
Credit: Citi Sports