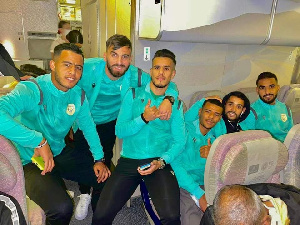 Saoura touched down at the Kotoka International Airport in Accra around 2pm and have moved straight to their hotel for camping.

The Eagles arrived with 19 players and will have their mandatory training at the match venue on Saturday afternoon.

Saoura eliminated Mauritanian side ASAC Concorde to get to this stage beating 2-0 in Mauritania before drew 1-1 in Algiers.

The Bechar based club have managed two wins, a draw and a defeat in four matches since the start of the Algerian Ligue 1 this term.

The Phobians take on Saoura at the Accra Sports Stadium on Sunday afternoon before travelling to Algeria for the second leg next week.

The winner of the tie will book their place in the group stage of the continental competition.