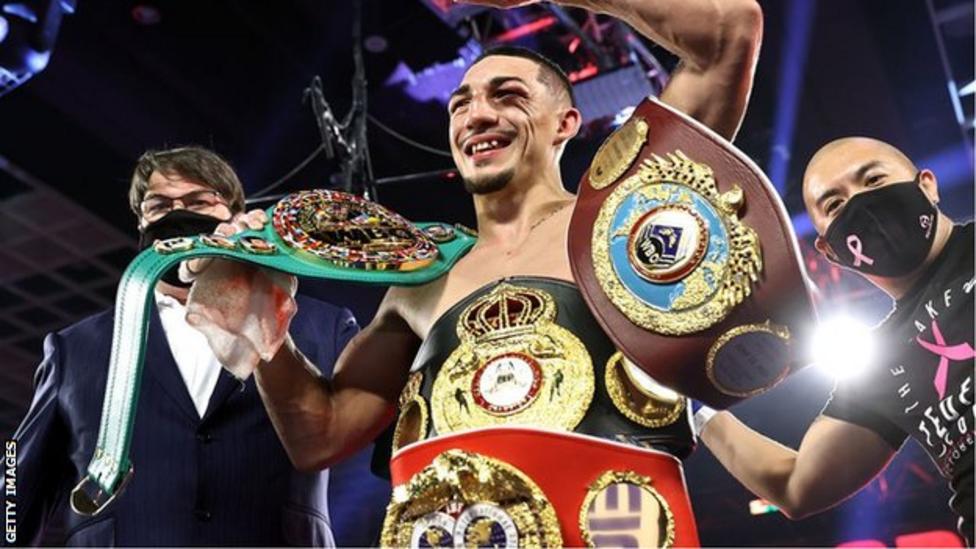 On the night he became the unified lightweight champion of the world, Teofimo Lopez would never have imagined he would spend over a year on the sidelines.

The American scaled the mountain to dethrone pound-for-pound great Vasiliy Lomachenko and add the WBA (Super) and WBO titles to his IBF belt 13 months ago in Las Vegas.

It was a punch-perfect performance from the then 23-year-old and made him the man to beat in the division. When talk of an immediate rematch with Lomachenko cooled, the IBF ordered Lopez to defend his titles against mandatory challenger George Kambosos.

But then the problems began.

As unified champion, Lopez was unhappy with his promoter’s offer to stage the fight. Lopez wanted a bigger pay cheque from Top Rank, but the American promoters refused to budge and Lopez’s first title defence went to a purse bid and in a bizarre turn of events Triller, a social media and music streaming service, won the broadcast rights with a huge $6m bid.

Then, after multiple delays that included Lopez having to pull out of a June fight date after contracting Covid-19, the IBF stripped Triller of the rights and awarded them to the second highest bidder, Eddie Hearn’s Matchroom. And so it is under the Matchroom banner that Lopez will finally – nine months after the rights were originally awarded – fight this weekend in New York.

“It’s been something. During that time I just took the time to really focus on me. I can’t believe it though. Nine months? Time flies.

“I’m a little disappointed. I didn’t get to fight as many times I had hoped to fight this year.”

Now Lopez wants to get back to work and aims to follow the example of Floyd Mayweather, who ended his career a multi-weight world champion and undefeated in 50 fights.

“You’ve got to have that vision and mindset. A perfect example is Floyd Mayweather,” Lopez said.

“The blueprint there is stay focused and dedicated and train like you’re broke and you’ve never had anything. If you can’t quite get that, you’re losing quick.”

On top of the repeated postponements, Lopez became a father just over a week before the fight. “Every time I hold him I’m mesmerised. I’m going to make it quick so I can come back to my son,” the New Yorker said.

Kambosos will have other ideas. The Australian is unbeaten in 19 pro fights and is four years Lopez’s senior at 28.

He is a big underdog against Lopez, especially with the prospect of massive unification fights against the likes of WBC champion Devin Haney and WBA (Regular) champion Gervonta Davis looming for the American in 2022.

“From him, you don’t know what you’re going to get,” Kambosos said. “You get a lot of lies, that’s for a fact. It doesn’t bother me. He’s got all the belts.

“He’s the big star at the moment. He’s the big celebrity. He’s caught up in the big lights. That’s fine.”

There has been no love lost between the two camps either.

Both fighters share their father’s name. Lopez is trained by his dad and Lopez Sr caused a real stir at the workouts on Tuesday when he was involved in a minor melee with Kambosos Sr.

After a lot of pushing and shoving and some colourful language, Lopez Sr was escorted out of the Church St Boxing Gym in Manhattan. But there was then an equally heated press conference on Wednesday which turned into a screaming match at times between the two sides. The Kambosos will be hopeful the fiery build-up is a sign of nerves from the Lopez camp.

Lopez says he is expecting an “all-action packed fight” and has dismissed talk he is thinking of future fights and taking victory over Kambosos for granted.

“It’s about the legacy, the glory,” he said. “At the end of the day you can’t have those big fights without beating the guy that’s in front of you first.