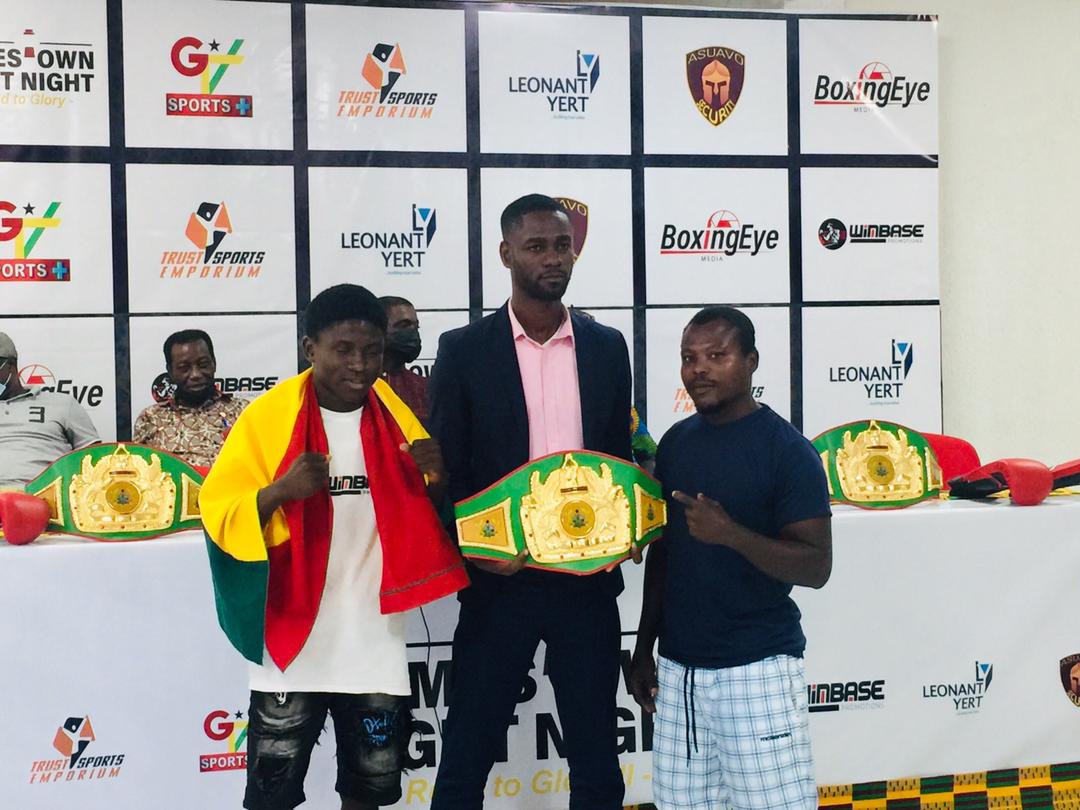 On Thursday November 25, 2021, Winbase Promotions held a press conference in Accra to unearth boxers of their fight night scheduled for Dec 4th at the Trust Sports Emporium, Gamashie Hall.

Edwin Nii Odartey Evans who is the promoter addressed the media and all boxing fanatics.

“First and foremost, I will like to acknowledge the presence of the Ghana Boxing Authority, the Ghana Boxing Supporters Union, the Media, and everyone present here. This press conference is to touch on the event we have on Dec 4 at the Gamashie Hall, Trust Sports Emporium, Let move straight to the action,” he said.

“Before me on the table, you can see three well-designed national title belts that will be at stake on the fight night. I wish all boxers well and let the best man emerge victorious thanks all,” Mr. Evans added.

Issac Aryeetey (Iron Boy) who is a co-main event for the night, also addressed the public and his opponent.

“I want to thank all elders and my manager who are present here, I have been training for some time now, though competitors are uncommon and I find it tough to get an opponent,” Aryeetey said.

“God being so good, I heard one is handy for me this time around so I’ve decided to make that test useful for myself and fans. He can’t outwit me in the ring even in my worst state. He will not traverse all the scheduled 12 rounds because I’m worthy for this” Isaac Aryeetey continued.

Joseph Akai Nettey, challenger for the national light flyweight championship also rebutted: “I want to thank everyone here and Winbase Promotions, I started boxing before him so the ring will determine. I know what I can do so it’s not about bragging here and there let’s wait and see what happens on that day whether the fight will travel all rounds or there will be a halt.”

In other fights, John Quaye will come up against WABU champ, Yusif Seidu for the Ghana title and promises to crush his opponent and he is ripe to surprisingly prove his opponent wrong.

“The people know what I can do so no need to say much here because I’m waiting on the big day,” Quaye said.

Yusif Seidu replied: “I’m ready to receive it all on fight night so he should be well prepared and come for the delivery. I heard he is the Junior Game Boy, well, l have seen what Game Boy does in the ring and can portray all, but when I release my style he will flee from the ring trust me.”

‘Pretty Boy’ Isaac Quaye also took the opportunity to thank all promoters and all officials for calling on him to get back to his roots to show what he knows best.

“Most of the people have forgotten who I am and what I have done in boxing, I’m back for good and because of my absence, I have something special for you all,” Isaac Quaye said.

In reply, the SWAG boxer of the year nominee Mohammed Aryeetey said: “I’m thanking all elders, I want him to know we are newly made rising stars and ready to move from national to international stage. My opponent has beaten a lot in the past, well that is in the past so he should be prepared when coming into the ring with the rising Golden Star, that’s all I have to say now.”

Other fights on the bill: