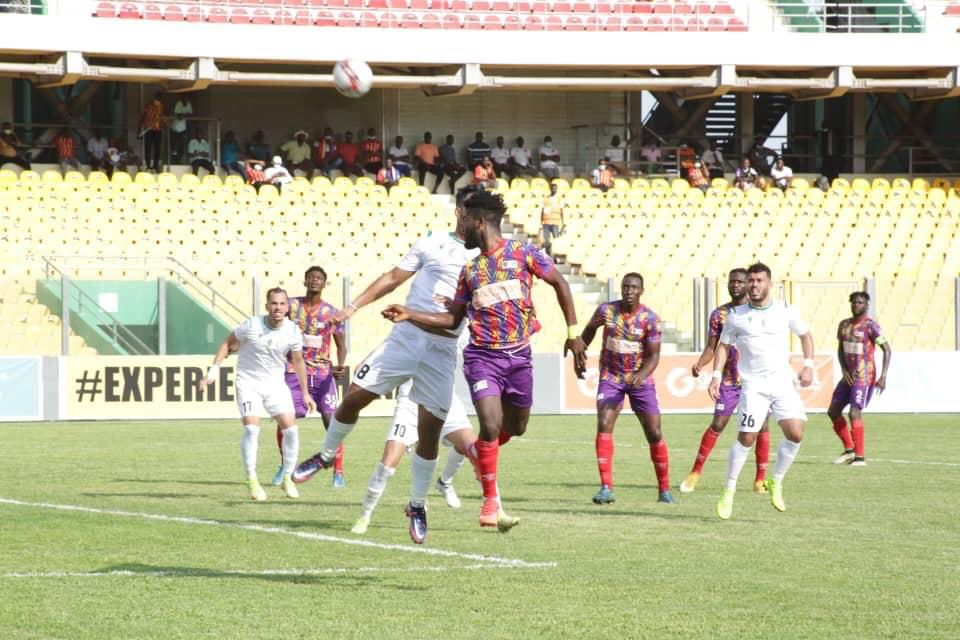 Hearts of Oak defeated ten-man JS Souara from Algeria 2-0 in the first leg of CAF Confederation Cup playoffs at the Accra Sports Stadium on Sunday.

Hearts needed a reaction as they have suffered one of their worst start to Ghana Premier League having lost last weekend to Ashanti Gold and extending their winless run to five games.

As a result, coach Samuel Boadu ringed several changes in the starting line up that played against Ashanti Gold with four players benched.

After missing some half chances early in the game, Hearts finally broke the deadlock through midfielder Ibrahim Salifu.

The nimble-footed player connected a tailor-measured cross from Afriyie Barnieh by the 16th minute to open the scoring.

Kofi Kordzi came close to making it 2-0 before the break but his effort was brilliantly saved by Souara goalkeeper.

After the break, Agyenim Boateng was thrown into the game to replace goalscorer Salifu as Hearts pushed men forward for more goals.

By the 53rd minute, Barnieh was set up to double Hearts’ lead but he surprisingly fluffed the opportunity. Mensah and Ansah Botchway combined beautifully and played Barnieh through only to miss the chance.

Hearts finally found an opening to score the second goal by the 70th minute with a team work goal.

Ansah Botchway combined with Denkyi and played substitute Agyenim Boateng through and the striker calmly finished it off.

Hearts had another chance to extend their lead three minutes later after JS Saoura goalkeeper Zakari Saidi was shown the exit after picking his second yellow card of the day following a rush tackle on Daniel Afriyie outside the box.

Although Aymen Mouyet replaced him, Hearts could not make the numerical advantage count as Souara held on to end the game with two-goal deficit ahead of the reverse fixture next weekend.