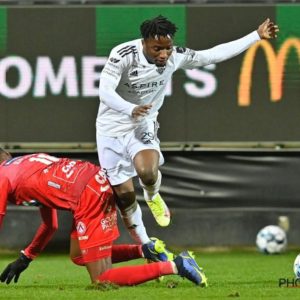 Ghanaian winger Isaac Nuhu extended his dream start to the 2021/22 Belgium PRO league with another master class assist in a four goal thriller with FC Kortrijk.

The KAS Eupen wide man stole the show in the opening embers of the embers and stamped his authority on the pitch with a game changing assist for Julian Ngoy 14 minutes into the game.

The much sort after Ghanaian wide man unleashed his predatory best down the flank to trap the ball before flawing two defenders en route to the assist.

A killer pass across the goal line left Julian Ngoy with the simplest of finishes to open the scoring for the host.

Kristof D’Haene pulled parity for the visitors before Stef Peeters restored the lead for the host just before recess.

The visitors fought back and earned a deserving point in the end to end clash that saw Isaac Nuhu actually topping the players rate card.

Isaac Nuhu and his KAS Eupen team mates dropped to eighth position on the league log after dropping the two valuable points.

Reports are rift in the Belgian Press on the imminent winter transfer of the Ghanaian speedster to French giants Olympique Marseilles.