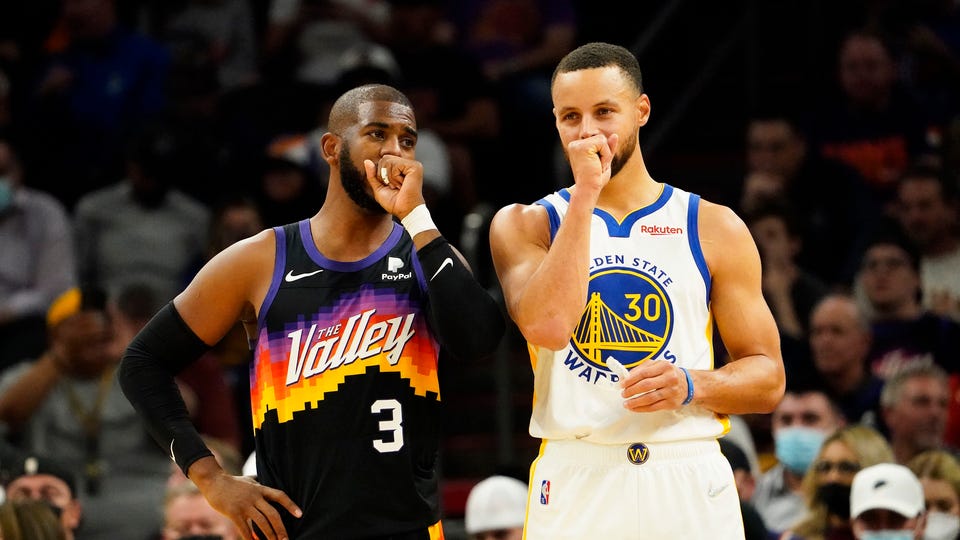 A hamstring injury kept Devin Booker sidelined in the second half, but he cheered from the bench.

Jordan Poole hit six 3s, but Phoenix limited Stephen Curry to 12 points on 4-of 21 shooting (3-of-14 from 3). Landry Shamet was cooler than ice cold, but hit a huge 3 that drew the loudest roar from the sellout crowd of 17,071 at Footprint Center.

And Chris Paul closed out another Suns victory Tuesday night that tied a franchise record for consecutive wins in the most anticipated regular-season game in recent history.

Without their leading scorer, the Phoenix Suns pulled away from the Golden State Warriors 104-96 in a battle of the league’s top two teams.

The two teams will meet again Friday in San Francisco, but here are five takeaways from Tuesday’s game:

1. With two of the top three defensive teams in the league on display, shots weren’t going to be easy to come by.

That was definitely the case. Contested looks. Contact on drives.

Both teams showed toughness in battling through it, which is why they’ll be in the championship conversation this season.

But Phoenix made the defensive stops at the end of the game.

From forcing a 24-second violation to Mikal Bridges reaching over Draymond Green to steal an entry pass from Curry to Jae Crowder and Deandre Ayton getting steals late, Phoenix won with defense. Again.

2. With Booker out, the Suns needed someone to pick up the scoring slack.

Ayton scored 11 points in the second half, with eight coming in the fourth quarter, to finish with a team-high 24 points to go along with 11 rebounds.

Paul scored six in the fourth as he finished with 15 points and 11 assists. The biggest number for him, though, was his 40 minutes.

So those two were the stabilizers that set the stage for Crowder and Shamet to hit perhaps two of the biggest 3s of the night in the fourth quarter.

The bucket got Monty Williams so excited, he walked onto the court thinking Warriors coach Steve Kerr called a timeout. Kerr didn’t and Williams got a technical foul.

Shamet was 1-of-6 from deep before connecting on that one. He’s been told to stay aggressive. He doesn’t always follow those instructions and could’ve easily stopped shooting Tuesday, but didn’t and knocked down a huge one.

3. Bridges only scored two points, but his defense on Curry was ridiculously good.

Yes, Curry missed shots, but Bridges gave the kind of effort that is required to guard the leading MVP candidate. Plus Bridges understands not only how to defend, but to do so without fouling and do it within the framework of the defense.

He wasn’t the only one who did a solid job on Curry.

Ayton, who is excellent at lateral movement on defense for a big guy, held his own on the perimeter guarding Curry.

The Warriors usually get bigs in those spots, but Ayton met the challenge.

With a defensive anchor in Ayton who can guard on the perimeter, a perimeter defender in Bridges who is all over the floor and the IQ of Paul, who recorded five steals, that’s a serious foundation for a strong defensive team.

4. Cam Johnson seemed to be dealing with leg cramps in his calf, but was determined to play through it.

Seeing him walk up and down the sidelines showed his desire to return to the floor, but he didn’t return for the last 5:38.

Johnson delivered when on the court, though. Shooting 3-of-7 from 3, Johnson finished with 14 points off the bench as Phoenix shot 12-of-30 on 3-pointers.

With Booker out, Crowder delivered with a team-high four 3s, giving the Suns seven 3s out of the four spot.

5. What does this win mean for Phoenix?

To come out with a victory without Booker playing in the second half speaks to the depth and toughness of this team.

Will they be able to go to San Francisco on Friday and beat the Warriors again on a second of a back-to-back with Booker likely out?

That’s an even taller order, but if the Suns can beat the Pistons to set a franchise record for consecutive victories Thursday night, that will make the rematch with Golden State even more intriguing.

If they don’t, it’s still going to be lit at Chase Center.