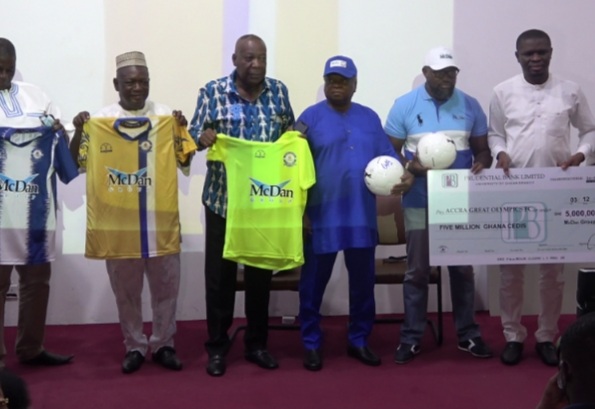 Ghana Premier League side, Great Olympics has announced a mouth-watering sponsorship deal with the McDan Group of Companies.

The two-time Ghana Premier League champions signed a three-year contract with the renowed company worth a total of $270,000 per year for three years.

The club will receive $100,000 of the money in cash, per season with the rest tied to performance related clauses.

Competing in Africa and winning the CAF Champions League will result in the McDan Group investing a further $10 million into constructing a 30,000 seater stadium for Accra Great Olympics.

Speaking at the signing ceremony, Chief Executive of the McDan Group, Daniel Mckorley, said he expects Great Olympics to make him proud.

“I don’t expect them to take this brand for granted. The brand alone has a lot of respect and now that we sponsor them, they must behave like McDan,” he concluded.

Head coach of the club, Annor Walker, expressed gratitude to the McDan Group for the sponsorship and says the deal has come at a timely time for the club.

“This came as a surprise and at a time that the club really needed a sponsor.  I am very happy because this will motivate me and the players to do more than we have done before. Whenever there’s support, it motivates people to do more and this will really push us to achieve greater things,” he concluded.

The deal was announced at a well-patronized event at the Accra Metropolitan Assembly Conference Room in Accra, with many former Great Olympics and Ghana players like Stephen Appiah, Laryea Kingston, Augustine Arhinful, Emmanuel Armah ‘Senegal’ all in attendance.

Great Olympics are currently 5th on the Ghana Premier League table after five games in which they have won two, drawn two and lost one.

They host Bechem United in their next match on Sunday 5th December, 2021.