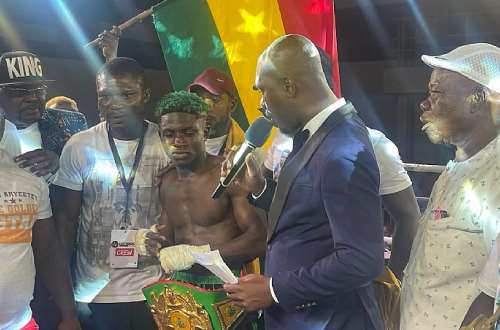 Young sensational boxer from James Town, Mohammed Nii Aryeetey Aryeetey was the toast of fans as he defeated Isaac Quaye on points to win the vacant National Flyweight title at the Ga Mashie Hall of the Bukom Boxing Arena.

Joseph Akai Nettey also became the new National Light Flyweight Champion when he put up a splendid performance against Isaac Aryeetey through a round 5 knockout after putting him down in round 2.

Sluggish Aduku Nsor was no match for bulky Osmanu Haruna as he could not live to expectation in their 12 rounds bout for the Ghana heavyweight title.

Both boxers did not please the fans, so the GBA did not give out the belt.

The promotion was organized by Winbase Promotions and sanctioned by the Ghana Boxing Authority (GBA).