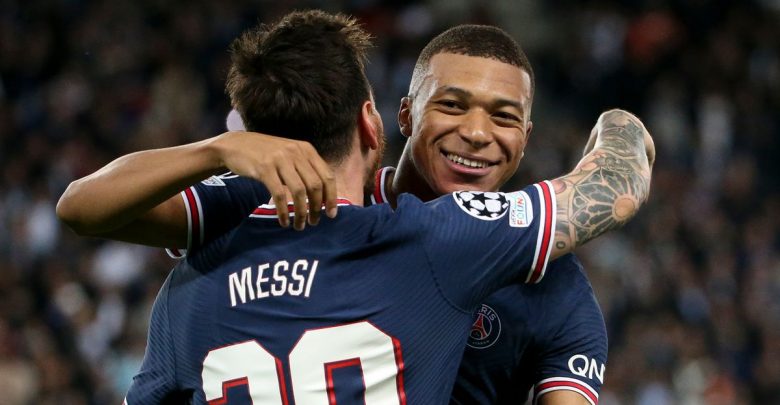 Kylian Mbappe scored twice in PSG’s 4-1 win against Club Brugge and in doing so broke a record held by team-mate Lionel Messi for over 10 years.

Mauricio Pochettino’s side cruised to victory at the Parc des Princes – with both Mbappe and Messi scoring twice – and Mbappe broke a Champions League record with his first of the night.

It was his 30th goal in the Champions League and less than two weeks from his 23rd birthday, it makes the Frenchman the youngest player to reach that tally, beating the Argentine who was 23 years and 131 days old when he scored 30 in 2010.

Tuesday’s victory was timely for Pochettino, following consecutive disappointing draws in Ligue 1 to Nice and Lens.

Mbappe scored his first Champions League goals for Monaco, scoring six goals during their memorable run to the semi-finals in the 2016-17 season.

But since his move in the summer of 2017, the French World Cup winner has been prolific for the Parisians.

Last season, he netted eight times in 10 Champions League appearances and following the group-stage this season, he has added four more goals to his impressive tally.

He now has 31 Champions League goals, as PSG look towards the knockout-stages in 2022.

They finished second in their group following their defeat to Manchester City two weeks ago, so can expect a tricky last-16 tie in the new year.

The closest Mbappe has come to glory in the Champions League was in 2020, when they lost in the final to Bayern Munich in Lisbon.