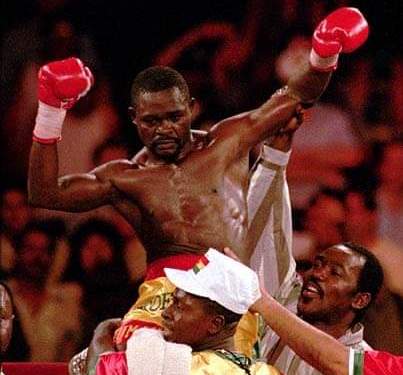 By the age of 26, Wilfredo Gomez had seen more successful title defenses of one belt than most fighters could experience in multiple careers. A record 17 defenses of the WBC junior featherweight belt, all by stoppage, and a shiny WBC featherweight prize are what Gomez brought into the ring against “The Professor” himself, Azumah Nelson.

When most press reported Gerry Cooney vs. George Chaplin as the main event of the December 8, 1984 card, Greg Simms of the Plain Dealer called that line of thinking “blatant ignorance of the fight game,” as a defense of the WBC featherweight belt by Gomez, not far from home in San Juan, Puerto Rico, against a finely-edged anvil like Nelson deserved top billing.

A more somber way of looking at it, however, was that it was a bout between the last two men Salvador Sanchez sent home early before his premature death in a 1982 auto accident

A pre-fight wire report out of Puerto Rico quoted Gomez — 41-1-1 with 40 knockouts going into the fight — as saying, “Nelson comes from Ghana with hopes to win, but lamentably, this title will stay here because it belongs to Puerto Ricans. My goal is to win three world titles, and Nelson is not going to block my career.

But Nelson was fully intent on blocking both Gomez’s career and his plans to face a young and newly-belted Julio Cesar Chavez, even if doing it in Puerto Rico, at the Hiram Bithorn Stadium in San Juan, would make the task all the more difficult. The Ghana native, 19-1 with 14 knockouts, said via Associated Press wire, “I won’t have a problem. I’ll knock out Gomez in the fifth round.”

Late legendary trainer Eddie Futch’s made his own prediction, stating, “I think Nelson does hit hard enough to knock out Gomez, but I hardly think that’s likely. I would have to pick Gomez to win because of his overall ability and punching power.”

Gomez fought with caution early in the bout, seemingly wary of Nelson’s strength and countering ability. At face value, Wilfredo Gomez did well when moving his feet and whipping out jabs; psychologically, Azumah Nelson was answering back and sealing off Gomez’s offensive momentum more often than not

Just as Gomez seemed to be finding a groove, Nelson landed a series of right hands in round 4 that negated what the Puerto Rican had done and filled Nelson with confidence that carried through into the 5th. But as Nelson pressed with bad intentions and Gomez was forced to stand and fight more in the 6th, fortune inched Gomez’s way.

Something of a tactical slugfest, if such a thing exists, spilled forth in round 7, with Nelson landing the more eye-popping blows upstairs but taking countless shots to the pelvis and sides in turn. As Gomez’s wick burned away, however, the fight went back to how it looked early: Nelson hunting, Gomez boxing cautiously. The 9th round saw Gomez seize back a chunk of the momemtum, but he found himself on the wrong end of more Nelson right hands in the 10th and looked ragged between rounds as a result.

Moments before the bell to summon for the 11th round, Nelson’s cornerman Bill Prezant reportedly told his man that he was losing and needed to “step it up.”

Surprisingly, judges indeed had the bout scored 97-93 and 96-95 for Gomez, and 95-95. And like an excellent pupil rather than a professor, Nelson unleashed an entire hive on Gomez, stinging him repeatedly with both hands and every available punch for two and a half minutes, until Gomez finally went down.

Up but looking worn, a pair of right hands ransacked Gomez’s neurons and awkwardly folded him backward, ending the fight.

“When I knocked [Gomez] down in round eleven, he was dazed,” Nelson said in “The Professor,” his 2014 biography. “The referee had to stop the fight, but the referee tried to help him and let him carry on. I came in and I feigned him and then threw a straight right, and he fell to the ground. He was not supposed to take that punch, and he wouldn’t have had to if the referee stopped it when he should have.”

In Ghana the streets were flooded with people celebrating. The broadcast had been delayed due to issues with the international video feed, but the Ghanaian government purchased rights to air the bout and make the fight accessible to everyone in the country.

Back in Puerto Rico there was plenty of in-ring pandemonium, and the Boston Herald reported the following day that Carl King, son of Nelson’s promoter Don King, was stabbed in the leg on the way from the ring to the dressing room.

It wouldn’t be the first time, but Nelson’s win made his country quake with pride. As with every win, there must be a loser. This time it was Gomez, who never truly reclaimed the success he had prior to running into Sanchez and Nelson. His career was ultimately the price of their greatness.