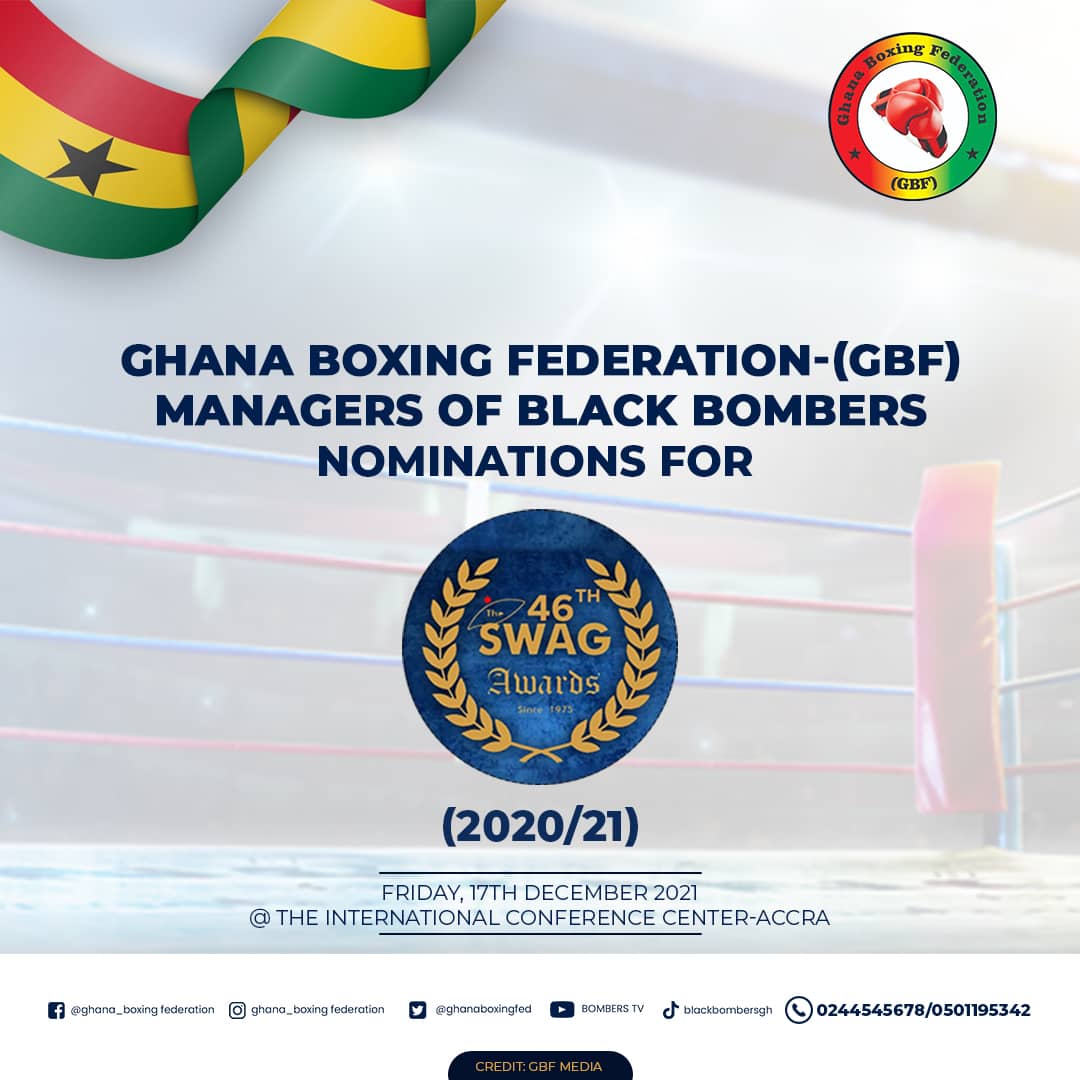 With nominations in six categories, the Ghana Boxing Federation (GBF), governors of amateur boxing in this country, are confident it will be a clean sweep of honours when the 46th (Sports Writers Association of Ghana) SWAG Awards rocks the Accra International Conference Centre in the capital on 17 December.

Top of the bill is Tokyo 2020 Olympic bronze medallist, Samuel Takyi who is gunning for the topmost sports personality of the year gong against the national 4x100m team which made the Olympic Games semi final as well as Accra Hearts of Oak star striker, Daniel Afriyie Barnieh.

The soon to be 21 year old Takyi is already assured of the amateur boxer of the year award following his Olympic Games heroics.

The GBF and their Acting President, George Okoe Lamptey are also vying for top sporting discipline and administrator of the year respectively.

1. SAMUEL TAKYI AKA Ring Warrior – Sports personality of the year

(Featherweight,52-57Kg)
For winning Ghana’s only medal – bronze at the Tokyo 2020 Olympic Games hence breaking the 29 years of hoodoo of not winning a medal, 49 years of individual sports not winning at the Olympics Games and also, Africa’s only boxing medalist at the Games.

Also, for qualifying for the Tokyo 2020 Olympics Games in February 2020 in Dakar, Senegal at the age of 20 years in his maiden international tourney.

No contest here as there can only be O bé winner. Basically for all the achievements listed above, Samuel Takyi has already been named the outright amateur boxer of the year and will receive that gong come awards night.

3. Ofori Asare – Coach of the year

The Technical Director, Ghana Boxing Federation and the Head Coach of the National Boxing team, Black Bombers, fora guiding the Black Bombers to qualify 3 boxers to the Tokyo 2020 Olympics Games, also 6 of the boxers going into the semi-finals including Ghana’s 1st female to win a medal – bronze, Dr Ornella Sauthod (Middleweight) at the Africa Olympics Boxing Qualifiers, Dakar-Senegal in February, 2020.

Coach Akwasi Ofori Asare also trained and guided the Black Bombers at the Tokyo 2020 Olympics Games in August 2021 that produced Ghana and Africa’s only Olympics boxing medal – bronze – at the games.2 of his boxers also made it the round of 16.

Six (6) times Olympics Games experience and only the second indigenous coach to win a medal at the Olympics Games after the late Coach Samuel Herman Arday with the Black Meteors (football) in 1992. The 3 other medals won by Ghana in the 1960,1964 and 1972 Games were masterminded by foreigners (Germans).
Coach Asare has also produced most of the current professional boxers who are highly rated and ranked by the world sanctioning and governing bodies including former WBO bantamweight champion, Isaac Dogboe.

He has led the Ghana Boxing team to the Commonwealth and Africa Games since 1995, winning medals from each competition he was involved in.

The President, Ghana Boxing Federation for his hardwork and efforts in getting the necessary resources and funds that enabled the Black Bombers to prepare for the Africa Olympics Boxing Qualifiers in Dakar, Senegal in February 2020.

Also, his personal efforts together with his executives to put the necessary funds, arrangements together for early camping and effective preparations for the Black Bombers to the Tokyo 2020 Olympic Games resulting in Ghana winning her 1st medal in 29 years and 49years for boxing which was Africa’s only boxing medal at the Tokyo 2020 Olympics in August 2021.

Mandated for the management, promotion, development and sanctioning of kids (7-12years), juvenile (12-17years) and 17 years + amateur boxing in Ghana.

For contribution, preparations and management of the Black Bombers to qualify and deliver at the Africa Olympics Boxing Qualifiers in Dakar, Senegal, February 2020 and Tokyo 2020 Olympic Games winning, Ghana’s only medal after 29 years and more significant to note, Africa’s only boxing medalist through Samuel Takyi – featherweight.