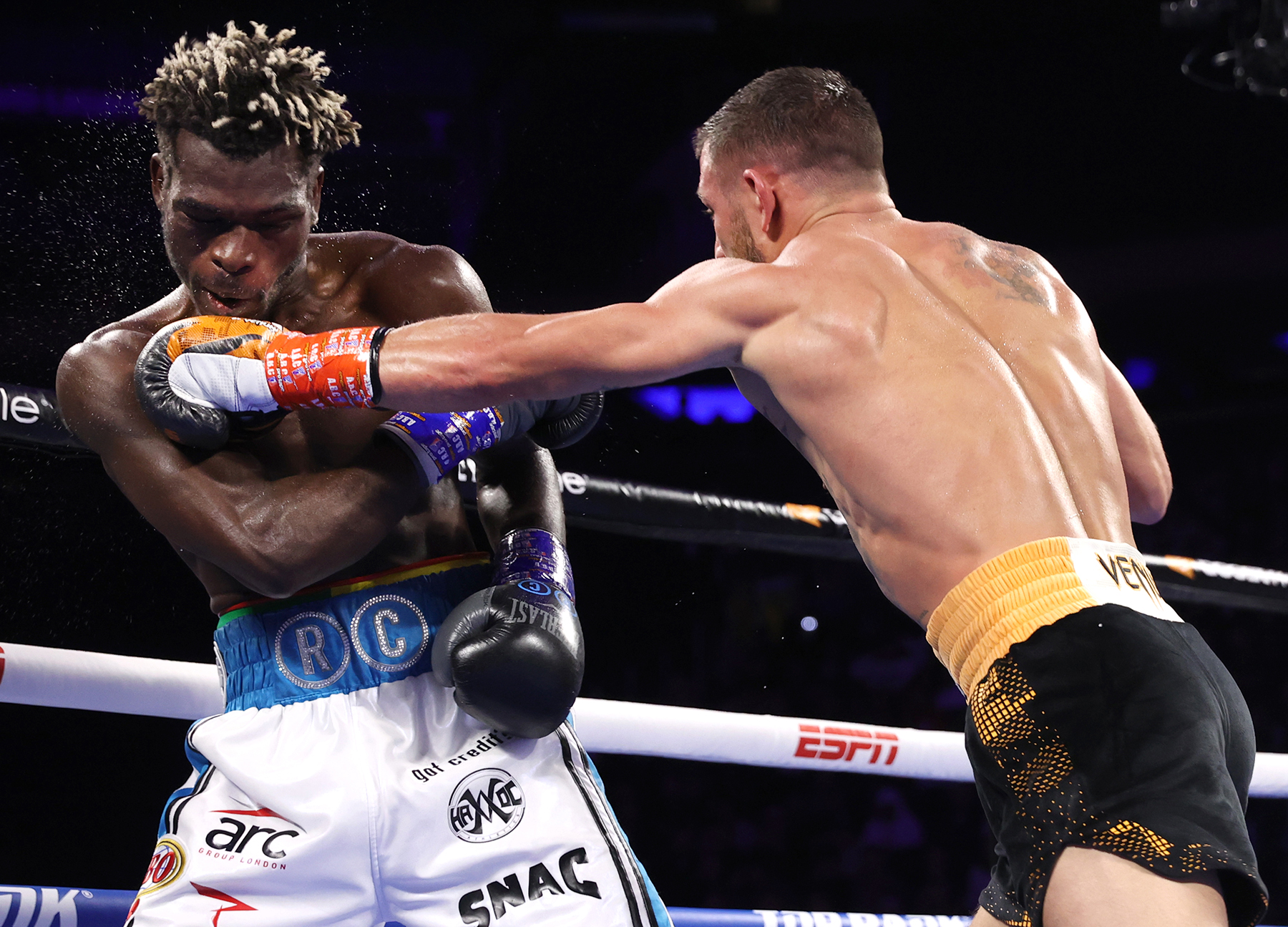 Vasiliy Lomachenko doesn’t have his lightweight titles anymore, but he just may be the division’s most dangerous man. Lomachenko, the former three-weight world champion, brutalized former lightweight champion Richard “RC” Commey, winning a wide unanimous decision over the Ghanaian in front of 8,555 fans Saturday night at Madison Square Garden.

Lomachenko knocked Commey down with a left hand coming off a clinch in the seventh round. Lomachenko then waved on Commey’s corner to stop the fight, but they did not oblige. Commey somehow survived as Lomachenko landed serious leather to the head and body.

“I saw his situation. It was very hard for him,” Lomachenko said. “That’s why I said, ‘Hey, stop the fight.’ He is a true warrior. He has a big heart and we continue and we show {the} people 12 great rounds.”

Commey said, “I took my eye off him for a second and them boom! I just took my eyes off him and then that’s it. It is what it is. He’s a great fighter. I did what I had to do. I’m good. I’m not hurt. Nothing happened to me.”

Jared “The Real Big Baby” Anderson (11-0, 11 KOs) did not nothing to dispel the notion that he’s the next great American heavyweight. Anderson knocked out Ukrainian puncher Oleksandr Teslenko (17-2, 13 KOs) in the second round, his third consecutive second-round stoppage.

Anderson ended the evening with a right cross-left hook combination that had Teslenko falling face first.

Anderson said, “We came in and wanted to confuse him, so we came out southpaw. I think we did just that. We switched back in the next round, and he didn’t know what was coming, and he ended up on the mat.”

Keyshawn Davis (4-0, 3 KOs), fresh off his silver medal at the Tokyo Olympics, put forth a golden performance. Davis knocked out Mexican bruiser Jose Zaragoza (8-4-1, 2 KOs) in the second round of scheduled six-round lightweight fight.

The second and final knockdown, a left hand to the body, spelled the end for Zaragoza.

Nico Ali Walsh, in the building where his grandfather made so many indelible memories, made one of his own. Ali Walsh (3-0, 2 KOs) bested Reyes Sanchez (6-1, 2 KOs) by majority decision (38-38, 39-37 and 40-36) in a four-round middleweight fight. Ali Walsh dominated the first half of the fight, but it was Sanchez who pressed forward in the third and fourth rounds. After two knockouts to start his career, Ali Walsh received a gut check.

Ali Walsh said, “I learned a ton tonight. Obviously, I fought against a well-matched opponent. He was 6-0.

“He saw my right hand. Obviously, I saw his as well. He was a very skilled opponent. A lot of guys with three fights don’t fight someone like him. But because my career has been fast tracked due to my name and grandfather, I’m fighting these types of opponents like Reyes Sanchez.

The 2021 Prospect of the Year competition may be a one-horse race. Puerto Rican superstar Xander Zayas (12-0, 9 KOs) picked up his sixth win of the year, knocking out Italian hopeful Alessio Mastronunzio (9-2, 3 KOs) in the opening round. Zayas knocked down his overmatched foe in the opening 10 seconds, then stepped on the gas until referee Danny Schiavone stopped the fight at 2:52.

“I told you I came here to make a statement. That’s what I did,” Zayas said. “I’m Prospect of the Year. I hope I let everyone know who is the prospect of 2021.”

Staten Island’s James “Crunch Time”  Wilkins (10-2, 6 KOs) notched a razor-thin unanimous decision over the upset-minded Juan Tapia (10-4, 3 KOs) in an eight-round junior lightweight fight. Wilkins, who knocked down Tapia in the fourth, had to withstand a late rally in the final two rounds to clinch the win by scores of 77-75, 77-74 and 76-75.

In a welterweight contest, the oldest of the fighting Davis Brothers, Kelvin Davis (3-0, 2 KOs) knocked out Ryan Schwartzberg (1-4-1, 1 KOs) after Schwartzberg’s corner stopped the fight following the second round. Davis tallied a knockdown in the second round with a left hand.

2016 Irish Olympian “Mighty” Joe Ward (6-1, 3 KOs) needed only 1:35 to knock out Mississippi native Britton Norwood (10-4-1, 7 KOs) in a light heavyweight contest that opened the show. Ward started the carnage with a body shot that nearly doubled over Norwood. Following a knockdown, Ward attacked and referee Charlie Fitch stepped in.