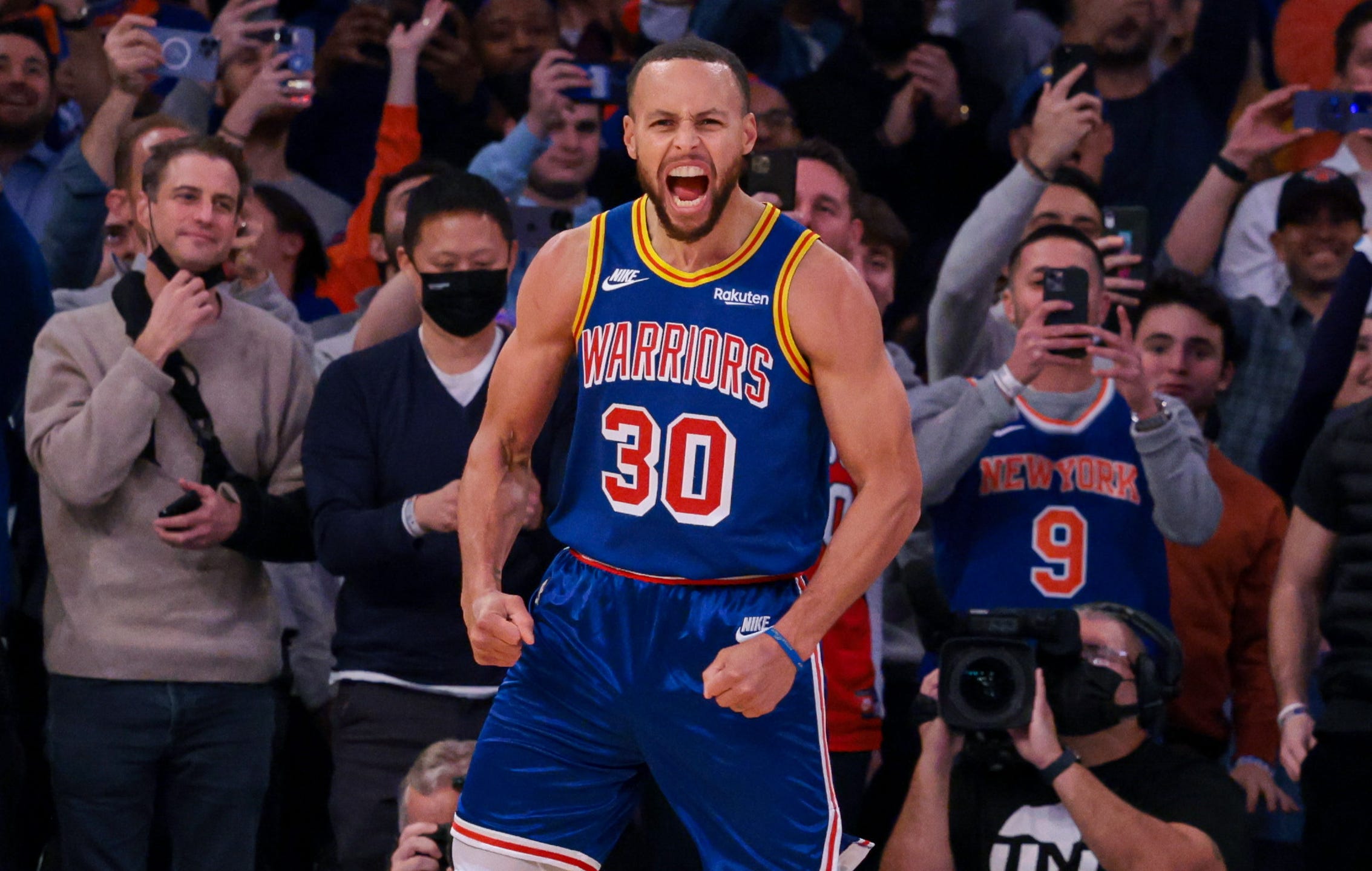 If Stephen Curry had to set the NBA record for career 3-pointers away from his home arena, he couldn’t have picked a more fitting place to do it than Madison Square Garden, where he announced his arrival as a superstar on Feb. 27, 2013, with a 54-point eruption against the Knicks.

On Tuesday, Curry needed two 3-pointers to pass Ray Allen’s all-time mark. He got the first inside the first two minutes, and the record-breaker came at the 7:33 mark of the first quarter.

Curry wound up with five 3-pointers on the night, extending his career total to 2,977, en route to 22 points as the Warriors came away with a 105-96 victory.

Golden State owns the league’s best record at 23-5, but it hasn’t been pretty of late, for the Warriors, who entered Tuesday night with the league’s 22nd-ranked offense over the last two weeks, or for Curry, who needed 14 attempts to get his five 3-pointers on Monday and is shooting under 35 percent from the field over his last eight games.

Hopefully for the Warriors, getting this record off his shoulders will snap Curry out of his shooting funk. But for now, the man is entitled to an actual human shooting stretch. For years Curry has rewritten the rules of reality as a long-range gunner, taking the craft to unimaginable heights with his endless range and off-the-dribble prowess.

The last point is the most important. It’s one thing to make 3s that somebody else creates; when you can create them for yourself, everything changes. Indeed, it’s almost impossible to find suitable words to illustrate the gap between Curry and every other shooter who’s ever lived, but this graphic paints a pretty telling picture.

Even the ever-humble Curry is finally willing to recognize himself as the greatest shooter in history.

Curry was understandably emotional after breaking the record. You could tell the magnitude of the moment hit him, and having his parents, and Allen, in the crowd, and Reggie Miller, who ranks third all-time on the 3-point list, on the call for TNT made it all the more special.

Looking forward, it’s wild to think how many more 3-pointers Curry could have left in his career tank. He keeps himself in impeccable condition, and shooting is an almost ageless skill. In fact, Curry will likely shoot even more 3s as he loses a step here and there over the next half-decade.

This season, Curry is jacking up 13.4 triples per game, which would be an NBA record for volume if sustained. He has never shot worse than 40 percent from 3 in his career. He’s on pace to make well over 400 3s this season if he stays healthy, which will put him somewhere north of 3,200 makes for his career. Extrapolate that over the next three seasons, and he could easily be over the 4,000 mark before his current contract even expires.

After that, who knows how much longer he’ll play. But if he wants to keep it going, even as a shooter off the bench as Ray Allen did in the later stages of his career, just do the math: If he keeps cranking them up at anywhere near this rate for the next half-decade, and continues to connect at a plus-40-percent clip as his No. 1-option role perhaps diminishes after that, 5,000 makes is well within reach.

I know we like to say that records are made to be broken, and no matter how high Curry takes his number, with how many 3s players are shooting these days (thanks to Curry’s influence), it’s feasible that a lesser shooter could eventually pass him. But I don’t know. If he gets it to 5,000, or anywhere near, that record is going to stand for a heck of a long time. It might be one of those rare few that are truly unbreakable, as Joe DiMaggio’s 56-game hit streak and Cal Ripken’s 2,632 consecutive games played have thus far proven to be.