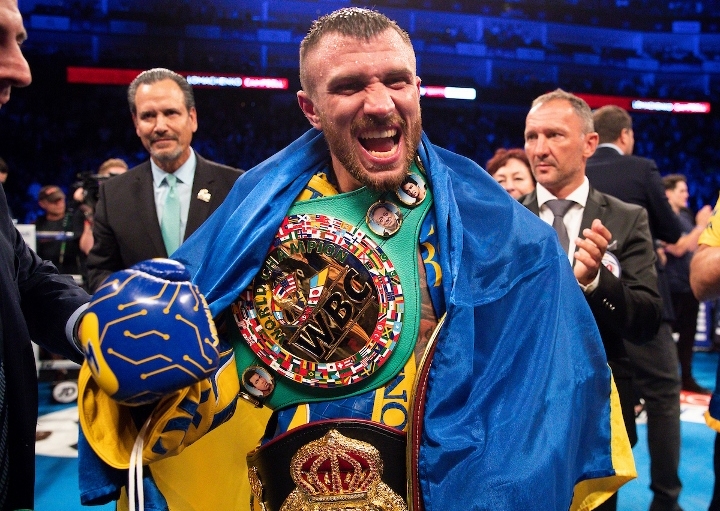 Lomachenko shone in a performance so dominant over Richard Commey that he refused to pursue a knockout and instead gestured for his opponent’s trainer to withdraw their man from the fight.

He had lost three world titles to Teofimo Lopez, who in his first defence, had them ripped away in a shock defeat by Kambosos Jnr.

Top Rank’s DuBoef, who promotes Lomachenko, said about chasing Kambosos Jnr: “Lomachenko has made it very evident to us, and to his team, that it’s the fight he would like.

“We are amicably trying to have discussions with them for a fight in the first half of next year.”

“I am optimistic that, at the end of [2022], we will have Loma back fighting for the titles,” Arum said.

Dean Lonergan, the Australian promoter who worked alongside Top Rank to stage Manny Pacquiao vs Jeff Horn in Brisbane, said: “The key thing for George is, if he wants to become massive in Australia, what he’s got to do is defend these titles against a big name and win. If he keeps winning, Australians will love him.”

Ukraine’s Lomachenko is a three-weight world champion who was rated among the world’s elite boxers before his surprise loss to Lopez.

He has since rebounded with two impressive wins.

Lomachenko is aged 33 among a division of younger rivals – Kambosos Jnr, Lopez, Devin Haney, Gervonta Davis and Ryan Garcia – but has shown no signs of slowing down yet.

“Lomachenko is a poster boy for many things in the sport,” said DuBoef. “He was aggressively matched – he came right out of the amateurs and fought for a world title [in his second fight].

“He doesn’t look at a setback as his value going down. He looks at it like a re-set to go forwards.

“He has come back with two brilliant wins and he never says no to any opponents.

“He wants his titles back.”

Lomachenko’s most recent win produced a unique moment – after knocking Commey down heavily, he then signalled for his rival’s corner to end the fight.

When they let Commey continue, Lomachenko chose to coast to a unanimous decision win.

“Lomachenko is a special individual,” DuBoef said. “He is incredibly gifted talent-wise.

“When he had Commey hurt, he didn’t want to go forwards. He looked for help from the referee.

“It was a sign of showmanship and class. He never threw hard to Commey’s head.

“He had an incredible observation of the field and his opponent.

“Watch his footwork – he doesn’t miss a beat. Watch his hands – they are in sync.

“He is as fluid as anything.

“He’ll be around for some time yet. Then he’ll be the kind of guy who walks away – and truly walks away.”