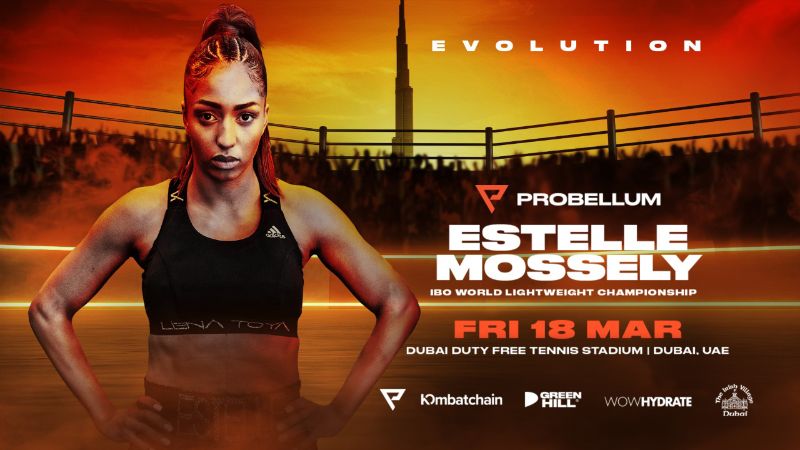 The final headline bouts for Probellum’s first event of the year have now been confirmed, with Jono Carroll also in action.

Those two fights will take place on the opening night, following the announcement that Sunny Edwards will put his IBF flyweight title on the line against Muhammad Waseem on night two, with Regis Prograis and Tyrone McKenna facing off in the co-main event.

Probellum’s Dubai double-header takes place on March 18 and 19 at the Dubai Duty Free Tennis Stadium, located at The Irish Village, in association with Jumeirah Creekside Hotel.

Undefeated IBO world lightweight champion Mossely (9-0, 1 knockout), Probellum’s most recent signing and the 2016 Olympic and World Champion, will become the first female boxer to headline an event in the Middle East.

Carroll (21-2-1), meanwhile, will be looking to build on his impressive win at Probellum’s previous Dubai show at the Coca-Cola Arena in December.

“History will be made on the opening night of our upcoming event in Dubai as Estelle Mossely and Yanina del Carmen Lescano go head-to-head,” said Richard Schaefer, President of Probellum.

“Probellum continues to make big strides in the boxing world and our ability to host events of this magnitude, having only launched in September, is indicative of our long-term ambitions.

“Our first show in Dubai last year was a huge success and this upcoming event, which includes two consecutive nights of top-level boxing, promises to be even bigger and better.

“I am looking forward to being in Dubai to watch history being made, and I would urge boxing fans across the Middle East to make sure they secure a ticket as this is an event not to be missed.”

With the event taking place over St Patrick’s Day weekend, more of Ireland’s most talented boxers will be confirmed to compete over the course of both nights in the coming weeks.

Ticket prices start from 50 AED and are available to purchase from Friday, 28th January via Platinum List or in-person at The Irish Village, Al Garhoud and Studio City.