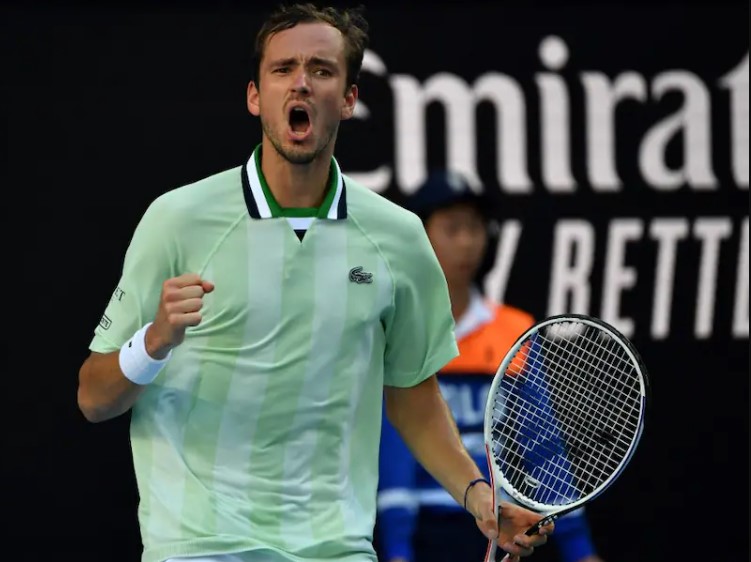 Nadal is level on 20 majors with his golden era rivals Novak Djokovic, who was deported on the eve of the tournament, and Roger Federer, who is absent with injury.

It gives the Spaniard an opportunity to go clear at the top in Sunday’s final and add to his lone 2009 Melbourne Park crown in his sixth Australian Open final.

Medvedev was in a fiery mood and given a code warning after raging at the chair umpire during his clash with fourth seed Tsitsipas, whose father Apostolos was also given a warning for coaching from the player’s box before inadvertently helping trigger his son’s collapse.

Medvedev is shooting for back-to-back major titles after upsetting Djokovic in last year’s US Open final.

Like in New York last September, when he stopped Djokovic from completing a calendar Grand Slam of titles, Medvedev will be trying to derail Nadal’s tilt at making men’s tennis history.

“I’m going to play against one of the greatest and someone going for the 21st Slam,” Medvedev said.

“I’m ready, I know that Rafa is a very strong player and I need to show my best to try and win this match.”

But Nadal said the Australian Open title meant more to him than a record 21 career Grand Slams.

“For me at the end it’s about more than all these statistics, it’s about being in the final of the Australian Open one more time. That means a lot to me,” Nadal said.

“To me it’s more important to be in the final of the Australian Open and fight to win another Australian Open than the rest of the statistics for the history of the sport.

“I just feel happy to be part of this amazing era of tennis, sharing all these things with another two players.

“That’s it. In some ways it doesn’t matter if somebody achieve one more or one less.”

It has been an extraordinary effort from Nadal at the year’s opening major, having to modify his game to compensate for a degenerative bone disease in his left foot that ended his 2021 season last August.

He then caught Covid in December which, he said, made him “very sick”.

Yet Nadal brushed aside Berrettini’s challenge with precision shot-making, while last year’s Wimbledon finalist could not overcome his sluggish start.

Later in a stormy night semi-final under a closed roof because of rain, Medvedev had a massive blow-up with the chair umpire during a changeover at 5-4 in the second set.

He was furious at the umpire over what he claimed was coaching from Tsitsipas’s coach and father Apostolos from the player’s box and the Russian received a code violation.

Medvedev raged at the umpire.

“His father can talk every point. Can you answer my question please?” he pleaded.

“Oh my God, you are so bad man. How can you be so bad in the semi-final of a grand slam? Look at me! I’m talking to you!”

Tsitsipas levelled up taking the chaotic second set as tensions bubbled over and Medvedev went ahead by taking the third set to gain the edge in a titanic duel shortly after Apostolos Tsitsipas was warned for coaching.

Tsitsipas fell away after his father’s warning, losing five straight games as Medvedev surged to victory to take his place in the final.