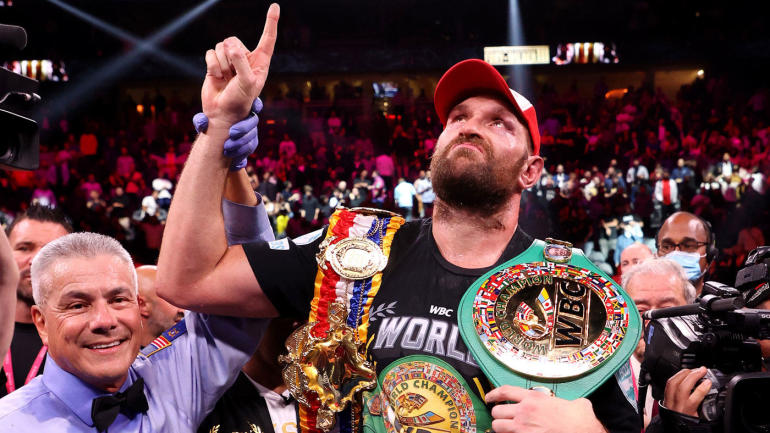 After years of waiting, Dillian Whyte will finally get his shot at the WBC heavyweight championship. Whyte, the WBC interim champion, will clash with champion Tyson Fury after the bout was made official in a purse bid on Friday. Frank Warren’s Queensbury Promotions won the right to promote the fight with an astonishing bid of $41,025,000, beating out the $32,222,222 bid of Eddie Hearn’s Matchroom Boxing. Warren is Fury’s co-promoter, along with Top Rank’s Bob Arum.

The fight nearly didn’t happen as Whyte (28-2, 19 KO) and former IBF, WBA and WBO heavyweight champion Anthony Joshua reportedly agreed to accept step-aside money to allow a four-belt unification between Fury (31-0-1, 22 KO) and Oleksandr Usyk, who won his three belts from Joshua this past September.

The parties attempted a last-minute renegotiation of the step-aside fees, according to a report from ESPN, leading to the entire thing collapsing and the WBC ordering a final deadline of Friday for Fury and Whyte to work out a deal or have the fight go to purse bid. The WBC had previously delayed the bid multiple times to allow the parties to attempt to work out the situation among themselves.

According to veteran boxing reporter Dan Rafael, this was the largest purse bid in history. While final details, including date and venue, still need to be worked out, the fight being secured by a promoter is a major step after starts and stops surrounding the possibility of a four-belt unification as well as Whyte’s camp taking issue with the planned 80/20 purse split in Fury’s favour.

Whyte has been in a spot as a top-ranked fighter in the WBC or a mandatory challenger since beating Robert Helenius to capture the WBC silver championship in October 2017. He continued winning fights and picking up various WBC secondary championships before suffering a crushing knockout loss to Alexander Povetkin in August 2020. He picked up a win in the rematch in March 2021, regaining his WBC interim championship and his status as mandatory challenger in the process.

The WBC world title was held up for most of that time in the trilogy between Fury and Deontay Wilder, with the pair battling to a draw in December 2018 before Fury scored knockout wins in the following two bouts. In between, there were plans for Fury to face Joshua before Wilder took legal action to enforce his right to a third fight.

With Fury and Wilder sorted and the possibility of a unification bout tanked, it’s finally time for Whyte to get his chance to become world champion.