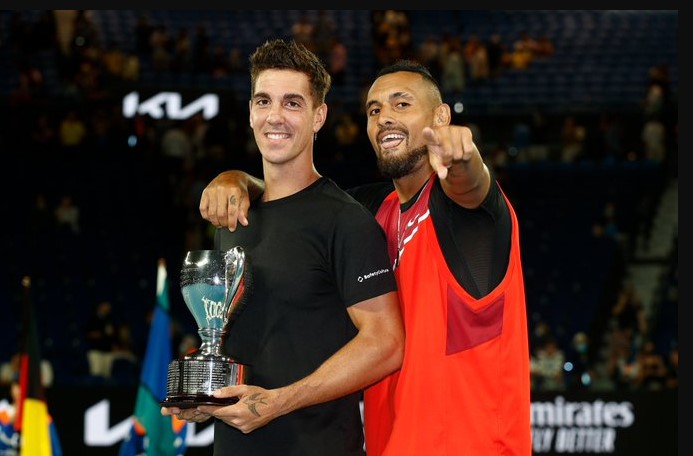 The team dubbed ‘The Special Ks’ Nick Kyrgios and Thanasi Kokkinakis completed a dream Saturday for Australian tennis by winning the men’s doubles title in Melbourne.

Australian fans have flocked to Melbourne Park to support the duo and provide a raucous atmosphere at their matches, bringing the doubles more attention than normal at Melbourne Park.

Having already toppled top seeds Mate Pavic and Nikola Mektic of Croatia in the second round, the duo got the better of compatriots Matt Ebden and Max Purcell in the final, winning 7-5 6-4.

The pair celebrated with a chest bump as they became the first all-Australian pair to win the title since Todd Woodbridge and Mark Woodforde in 1997.

The pair have been friends since childhood and won the Wimbledon junior title together nine years ago.

“What a week,” said Kokkinakis. “Nick, I love you brother. I can honestly say we did not expect to even come close to this.”

Kyrgios added: “This week has been a dream come true and I wouldn’t want to do it with anyone else. I’m just super happy. I don’t know how we’re doing this or what’s going on.”

A backhand from Kokkinakis sealed the first break of the match in the 11th game and the duo closed out the opening set on their service game.

The duo took a 4-3 lead in the second set after breaking to love before they had a match point denied by their opponents at 5-4.

The pair finally wrapped up the match on serve, with Kyrgios blasting two aces as they won the contest in 95 minutes.

It was a first doubles triumph for the pair at a Grand Slam and they also became the first wildcard team to win the Australian Open men’s doubles title in the professional era.