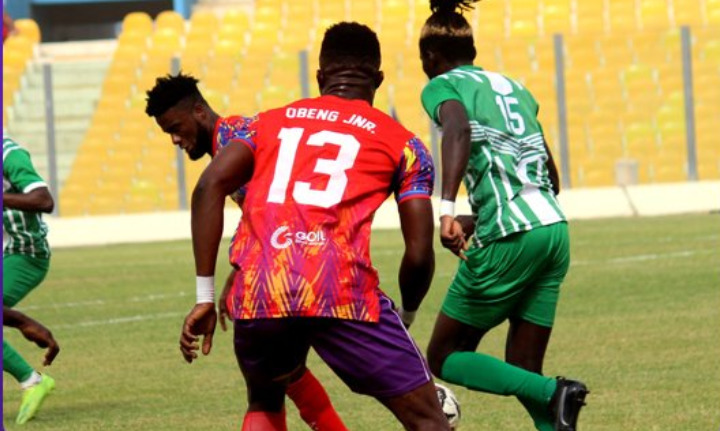 Accra Hearts of Oak grabbed a 1-0 win against King Faisal at the Accra sports stadium on Sunday.

Kojo Obeng Jnr. was the hero of the day as his 24th minute strike gave the Phobians all the spoils in a game of few chances that saw both sides struggle to create openings. Obeng Jnr got on the end of a lovely ball from Mohammed Alhassan as the forward controlled before smashing home from distance for the only goal of the match.

Kofi Kordzie headed wide a decent chance minutes after coming on from the bench. Accra Hearts of Oak who have a game in hand against arch rivals Asante Kotoko held on to win their fifth home match of the season and moves to the 5th spot with 23 points – 10 points off the top.

Berekum Chelsea recovered from their five match winless run as they defeated Accra Lions 3-1 at the Golden City Park. Henry Ansu scored the opener but Lions levelled matters in the 37th minute through Frederick Asante. Ansu again score the second of the day from the spot to make it 2-1 before Kelvin Obeng fired home the third from close range to give the Blues their first win in six matches.

In Tarkwa Godfred Kwadwo Asamoah climbed off the bench to score the winner for Medeama in their 1-0 win over Elmina Sharks at the Akoon Park.

The former Dreams FC playmaker netted the only goal of the match in the 69th minute to avoid another disappointment following last week’s defeat to Asante Kotoko.

Yaw Annor scored two goals in either half as AshantiGold beat Dreams FC 2-1 at the Len Clay stadium. The winger netted in the 14th and 90th minutes before Maxwell Arthur pulled one back for the Still Believe lads in added time.

Legon Cities coasted to a 3-0 win over Eleven Wonders at the Elwak stadium on Sunday. Hamzah Nassiru opened the scoring for the Royals before Croster Obour Adu and Jonah Attuquaye added to the tally to win comfortably at home.

Justus Torsutsey and John Tedeku combined to score the only goal of the match as WAFA beat Bibiani Gold Stars 1-0 at the WAFA Park at Sogakope.

Kelvin Andoh scored in the 75th minute to deny Real Tamale United the points as Karela United came from behind to draw 1-1 with the Northern giants at the Aliu Mahama stadium. Midfielder Iddrisu Gadafi netted the opener for the home side before the break but Karela United fought back to pick a point.

On Saturday, Bechem United stunned Aduana FC 1-0 to become the third team to beat the former champions at the Dormaa Park in the on-going League. Samuel Osei Kuffuor scored the only goal of the match in the 17th minute as Bechem United moved to second place with 26 points.

Earlier on Friday, Asante Kotoko beat Great Olympics 2-0 to keep hold of their place at the top of the table. The Porcupine Warriors have amassed 33 points after 14 matches in the League as they have an outstanding game against arch rivals Hearts of oak scheduled to be played on February 20.