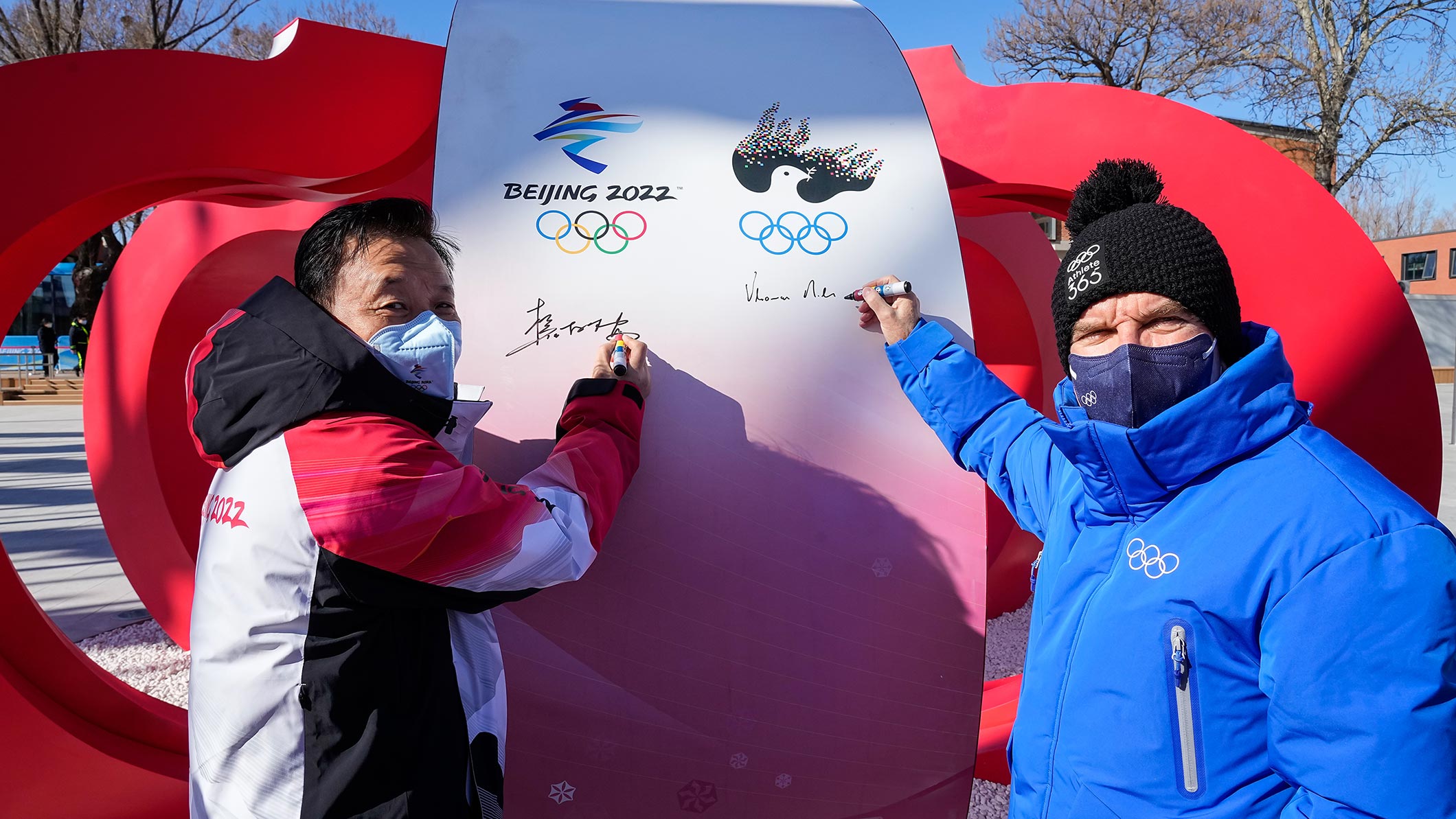 The Olympic Truce Murals at the Olympic Villages of the Olympic and Paralympic Winter Games Beijing 2022 were inaugurated today during a ceremony at the Flag Mall of the Beijing Olympic Village. Participating athletes and officials are invited to show their commitment to building a peaceful world through sport by signing the Mural.

Placed at the heart of all Olympic Villages since the Olympic Winter Games Turin 2006, the Olympic Truce Mural is a strong symbol of the power of sport to bring the world together in peaceful competition and create opportunities for dialogue and reconciliation. The concept of the Beijing 2022 Olympic Truce Mural, named “Light of Peace”, is inspired by traditional Chinese lanterns symbolising light, peace and reunion.

On the symbolic date of the Chinese New Year, the inauguration of the Mural took place during a ceremony attended by IOC President Thomas Bach and Beijing 2022 Vice-President Yang Shu’an, along with the IOC Vice-Presidents, members of the IOC Athletes’ Commission, and representatives of Beijing 2022 and the Beijing Olympic Village.

The two leaders were the first to sign the Mural. “It is a truly auspicious moment to inaugurate the Olympic Truce Mural today on Chinese New Year,” said the IOC President in his speech.

Addressing the winter sports athletes who are competing at Beijing 2022, President Bach acknowledged them as ambassadors to promote peace and human understanding: “Over the coming days, you will compete fiercely against one another. At the same time, you will be living together peacefully and respectfully under one roof, in the Olympic Village. In this way, you will show us what the world can look like if we all respect the same rules and each other. This is the true Olympic spirit. This is the message of the Olympic Games: bringing the world together in peaceful competition. In this Olympic spirit, I invite you to leave your signature on the Olympic Truce Mural to show your commitment to this mission of peace of the Olympic Games.”

Beijing 2022 Vice-President Yang added: “Setting up the Olympic Truce Mural and encouraging all ‘villagers’ to express their wish for peace by signing is the best implementation of the United Nations [UN] Olympic Truce Resolution.

“I hope the ‘Light of Peace’ will bring the warmth of home to everyone in the cold winter, light up new hopes and convey our good wishes of pursuing peace, enhancing mutual understanding and working together for a shared future.”

The Olympic Truce for Beijing 2022 was established in the UN resolution entitled “Building a peaceful and better world through sport and the Olympic ideal”, which was adopted by consensus at the 76th Session of the UN General Assembly in New York on 2 December 2021. It was co-sponsored by 173 UN Member States, demonstrating the widespread support and recognition by the international community of the power of sport and the relevance of the Olympic Winter Games to bring the world together in peaceful competition, providing hope for a better future.

The tradition of the Olympic Truce, or “Ekecheiria”, dates back to the 9th century BC in Ancient Greece as a period during which war and conflict ceased to allow for safe travel to and from the ancient Olympic Games.