FEATURE: Dumping image for cash ...saga of our boxers 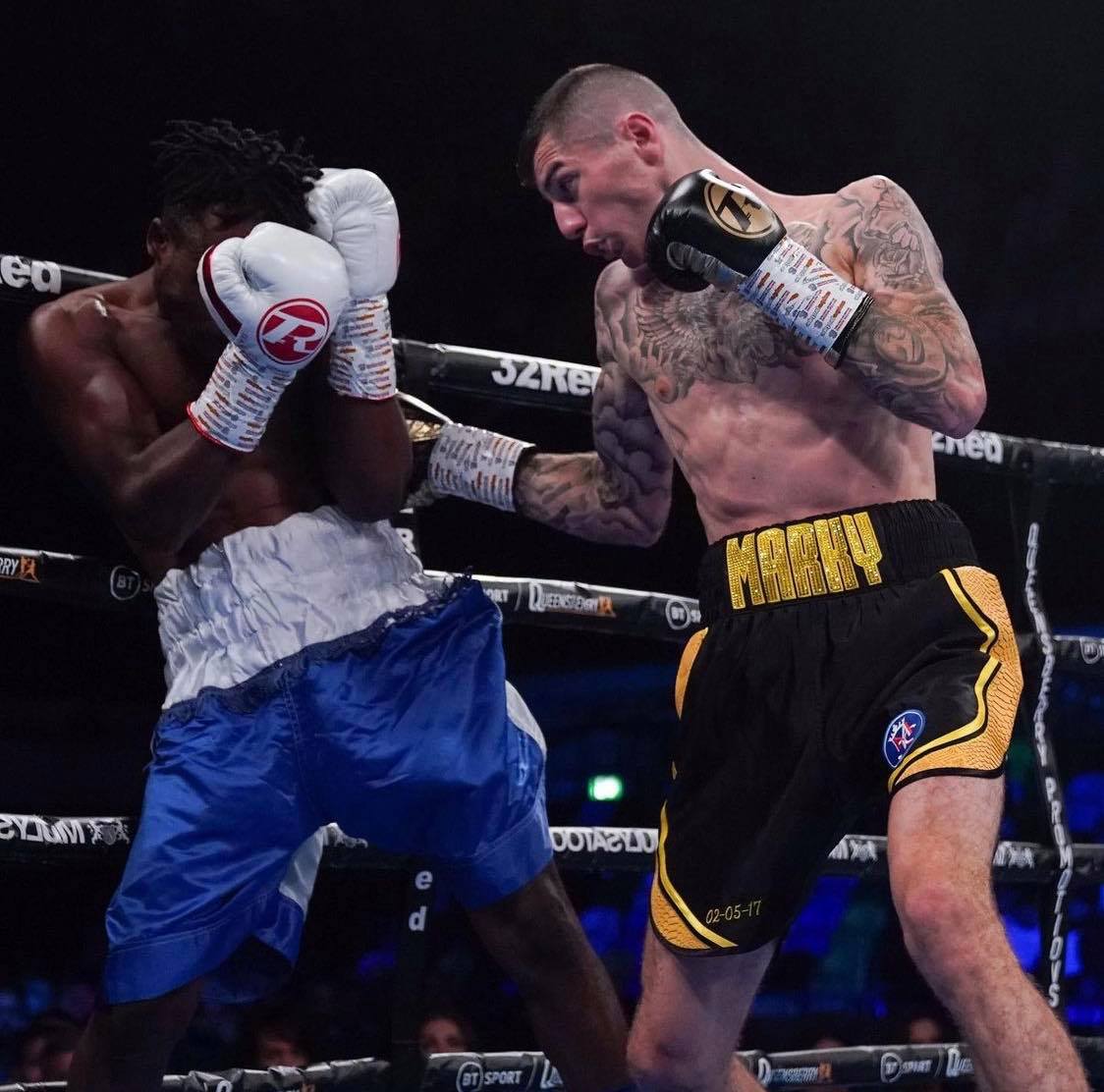 Lamptey (right) at the mercy of Chamberlain in September, last year

For a couple of years now, a decent number of Ghanaian boxers have confidently jetted out of the country under the pretext of battling their way to glory, only to end up happily improving the fight records of their opponents.
These boxers, most often unprepared, sneak out for such fights in the USA and other parts of Europe, especially. It is alleged that the compromised boxers are usually paid some considerable amount of dollars by promoters of their opponents – and match-makers, for them to lose.

Investigations by the Times Sports suggest that the trip, boarding and lodging of these Ghanaian boxers, are sponsored by such promoters – and sometimes managers of their opponents, once they were certain of the deal.
Most of these fights ended up as walk in the park for the foreign boxers.

There are two categories of boxers in this regard: those who have perceptibly good fight records are able to attract good offers once they agree to throw the contest; others whose records are nothing to write home about, get less in return for their negotiated battering.

Interestingly, this phenomenon is not unknown to the chieftains of the pugilistic sport and some of the nation’s marquee boxers.

Undefeated lightweight boxer, Bastie Samir, told the Times Sports he knows a couple of his colleagues who only travel outside the country to get beaten for cash. Sadly, he refused to mention names – though he insisted “it is all-too known to everybody in the boxing community.

“I can’t mention out names. But I can tell you emphatically that a number of our boxers travel out of the country consistently, get beaten within one or two rounds and smilingly dance away with cash,” he asserted.

In the last three years or so, we have had some of our boxers crushed in the most irritating manner – evidently suggesting they had brought knife to a gunfight. Mention can be made of heavyweight boxer Richard Lartey who was kayoed in the first round to Abdulkerim Edilov in Russia, last November. He had lost earlier to Fabio Wardley in yet another embarrassing manner in the UK.

Another boxer, Isaac Sackey was fatally beaten and knocked out in his super bantamweight contest against Yevgeniy Pavlov for the WBA international title on September 21, last year, in Kazakstan.  Ghana’s Benjamin Lamptey was also pummeled by undefeated British fighter Mark Chamberlain, on September 11, 2021. The eight-round fight ended prematurely in round four as Lamptey went down once in the second round and again in the fourth before the stoppage, extending Chamberlain’s unbeaten run to 9-0, 6KOs.

In October 2019, Ghana’s super welter weight Richmond Djarbeng, failed to respond to the bell in round three in his fight against Scottish Lee McAllister. The Ghanaian has been a consistent loser on the road. Then on November 13, 2021, Irish boxer Stevie McKenna cut Djarbeng into ribbons in their welterweight contest – finishing the lame adventure in 43 seconds inside the first round.

Right from the get-go, McKenna pushed the Ghanaian back to the ropes and left bombs go. Djarbeng had no choice but to try and cover up. He eventually buckled under the pressure and hit the canvas. Having faced a taste of what probably lay ahead if he rose to his feet, he remained on one knee as the referee counted him out. Galling loss!

Watching videos of the fights critically, one was compelled to believe that the boxers only came to dance through the drills. They virtually staggered into the ring and lamely offered themselves as sacrificial lambs. They had nothing to show. The legendary Ghanaian firepower, doggedness, aggressiveness and doughty character were all sorely missing.

Some of our boxers are coming from less-privileged backgrounds and could be predisposed to the temptation of jumping hungrily at ‘anything’ thrown at them to fight in Europe – and sometimes too, at the blind side of the Ghana Boxing Authority (GBA).

A boxer who pleaded anonymity told the Times Sports that he had flown out of the country a couple of times for fights and got beaten ‘because I was not really prepared but wanted the cash.’

“I usually get offers from match-makers to fight in USA, South Africa and Nigeria which I readily agree to because I needed the cash badly to take care of my family,” he said.

Sadly, the cash ranges from as low as $1,500 to $5,000. Back home, it may gleefully translate into some decent money for the boxer.

New Communications Director of the GBA, Mohammed Amin Lamptey, was not ignorant of the saga when reached, describing the phenomenon as ‘tsi le agbeshi’ in the Ga language (push-him-down) in local parlance.

Ttsi le agbeshi, he explained further, does not require a boxer needing to work his fingers to the bone to beat his game-playing opponent – who is all-too ready to go down at the slightest punch.

“It is an open secret that some of our boxers leave here terribly unprepared and only go for the cash. This is totally abhorring because it is giving the country a lot of bad image,” he said, assuring that the new GBA has put in place measures to stalk the situation.

In July 2021, Abraham Kotei Neequaye upstaged Manly-Spain to succeed Peter Zwennes as GBA President.
According to Amin Lamptey, the GBA has recalibrated the system which demanded boxers from all weight categories to come and register and get licensed, adding that “now boxers cannot leave the country to fight without authority from us.”

“As I speak now, boxers cannot be taken out for fights unless we consent or approve to it,” he said and insisted that his boss (Kotei Neequaye) was determined to put an end to the situation where some of the boxers abused the system “because there were no checks and balances.”

In order to make the local scene attractive and buoyant to boxers, the GBA recently unveiled 10 new national title belts which are meant to be kept by the pugilists once they annexed them.

The GBA boss noted that the initiative was geared towards the revival of professional boxing in Ghana.

“You would agree with me that these three critical components are very essential to the accomplishment of our vision and purpose of pro-boxing in Ghana. My utmost agenda in the realisation of my vision is to consider the welfare of active boxers and their trainers and coaches,” he told the media.

Again on December 24, last year, the GBA initiated the revival of the Ghana Professional Boxing League (GPBL) with the launch of a five-year sponsorship deal worth $1.7 million by IMAX Media Group. Per the package, the GBA will receive $450,000 annually to stage two seasons of the league. The first season is scheduled to commence on Saturday February 12 to June, this year.

The money is also expected to cover cost of purses of fighters, ring officials and the general organisation of the league.

“This is a game changer for the boxing fraternity and I want to call on all boxers to embrace it to their advantage,” the GBA boss remarked.

It goes without saying that the pro-league – which would have amateur boxers too fighting undercards, will keep the boxers competitively active as well as provide the mega platform for them to showcase their talents – and blossom to become world beaters.

Boxers on the boxing night are expected to pocket GH¢600 or more, it was learned. Only licensed stakeholders will be allowed to participate in the league.

Ghana is embarrassingly without a world champion at the moment. It is, however, anticipated that within the next couple of years, the boxing league would produce a steady stream of champions – once it is sustained.

Credit must go to the Neequaye-led GBA for putting stringent measures in place in a bid to sanitize the system – and ultimately halt the indiscriminate flight of the nation’s boxers to other countries to trade their careers for cash.