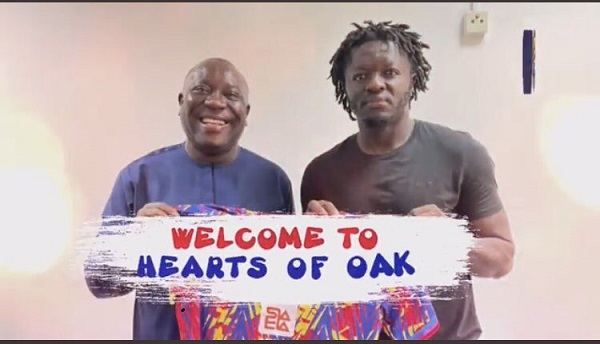 Former Black Stars midfielder, Sulley Ali Muntari, was on Monday unveiled by Accra Hearts of Oak after signing a one-year deal with the Phobians.

The veteran winger, whose flourishing career saw him featuring for Portsmouth, Inter Milan and AC Milan, among others, finally joined the Phobian family after training regularly with them for sometime now.

Muntari, 37, is a former UEFA Champions League winner with Inter Milan and is scheduled to help Hearts to defend their league title in the second round.

The former Ghanaian international was at the Accra Stadium to boost the morale of his new teammates during Hearts’ Ghana Premier League match day 15 encounter against King Faisal, which the Phobians won 1-0, courtesy Kwadjo Obeng Jnr’s strike.

Muntari could make his debut for the Rainbow club when they play as guests of city rivals, Great Olympics, at the Accra Stadium on Sunday.

Muntari has played for nine different clubs since leaving his boyhood club, Liberty Professionals, in 2001.

He started at Udinese in the Italian Serie A, before joining giants Inter Milan and AC Milan. Muntari also excelled at Portsmouth in the English Premiership and later had stints with Pescara, Deportivo La Coruna and Al-Ittihad Club in Saudi Arabia.

Muntari has won seven trophies, including the Champions League, two Serie A titles and the English FA Cup.