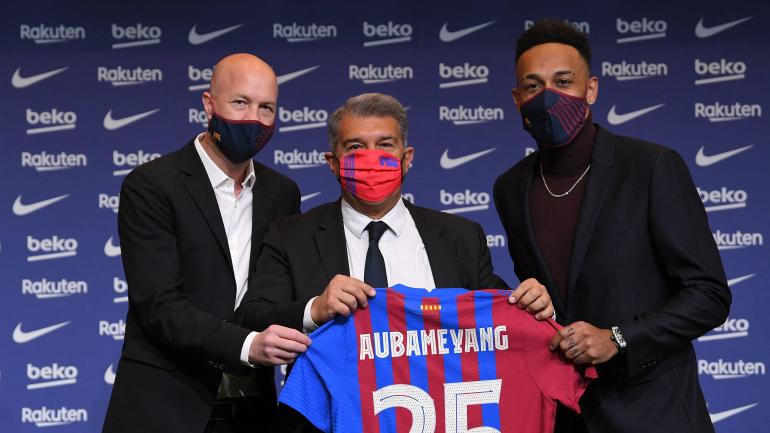 Aubameyang says he is “very proud” to have joined Barcelona on a free transfer from Arsenal.

The 32-year-old Gabon international contract with Arsenal, which was due to run until 2023, was terminated earlier this week as the North London club decided to cut ties with their former captain.

Aubameyang hopes to make Barcelona a force in the Champions League once again, and also said of head coach Xavi Hernandez: “He will bring us something. We will learn, definitely.”

“My main goal is to help the team and give everything I can to… bring the team back, in the Champions League and stuff like that. So, I’m just happy to be here and I will try to give everything,” said Aubameyang.

Adama Traore was unveiled by Barcelona on Wednesday and said he is ‘happy to be back home’ after returning to the club on loan from Wolverhampton Wanderers until the end of the season.

Adama Traore looked sharp in training on Tuesday as the former Wolverhampton Wanderers forward adjusted to life back at Barcelona.

The 25-year-old joined the Catalan giants on loan from Wolves last week, but trained for only the second time on Tuesday.

Xavi Hernandez used the opportunity to assess the fitness of Traore and his teammates fitness ahead of Sunday’s La Liga match at home to current champions Atletico Madrid.

Arsenal have also confirmed that Pierre-Emerick Aubameyang has left the club by mutual consent ahead of his move to Barcelona on a free transfer.

It’s thought Aubameyang met his new Barcelona team-mates on Tuesday after agreeing a dramatic transfer to the Spanish giants from the Gunners.