Egypt coach Queiroz: ‘How can this referee, after what he has done, be in Afcon?’ 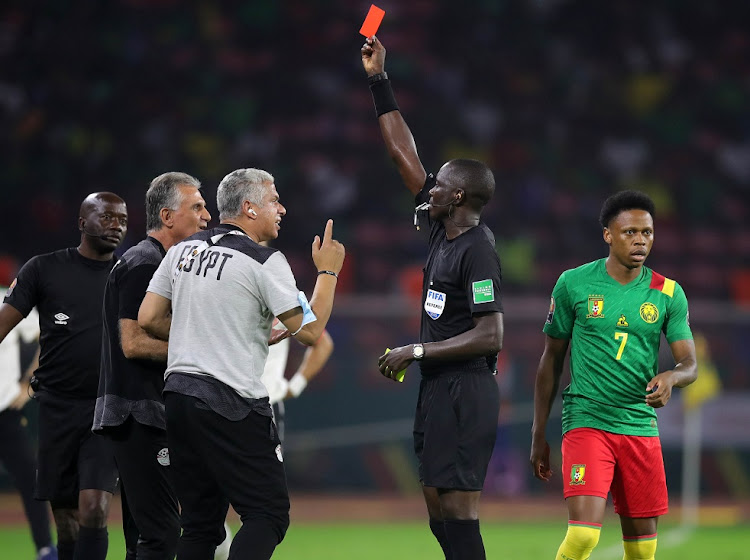 Egypt coach Carlos Queiroz, left and obscured,) receives a red card from peferee Bakary Papa Gassama in the 2021 Africa Cup of Nations semifinal against Cameroon at Olembe Stadium in Yaounde on February 3 2022.

Egypt will be without head coach Carlos Queiroz and his assistant Roger de Sa for Sunday’s Africa Cup of Nations (Afcon) final against Senegal after the pair received sanctions in consecutive games in Cameroon.

Former Orlando Pirates coach Da Sa was banned for four matches following the fracas at the end of Egypt’s quarterfinal with Morocco, meaning he will also sit out his team’s Fifa World Cup qualifiers in March. Ironically, those are also against Senegal.

Queiroz faces a ban from the Afcon decider after his red card in their semifinal penalty shoot-out win over hosts Cameroon in which he persistently berated Gambian referee Bakary Gassama, leaving the official with little choice.

The Egyptians had protested against Gassama’s appointment before the game, claiming he had made many mistakes in their recent matches. They had asked for SA’s Victor Gomes to be in charge.

Clearly Queiroz was riled up before the game got underway and was on the official from the start. He had not calmed down after the match either.

“Again, unfortunately, they [Caf] send this type of referee to a game of this level, a referee with no experience, no level, wanting to put on a show. It started in the dressing room,” Queiroz told on SkySports.

“We hadn’t started the game yet and he comes to the locker room to intimidate our staff. But even against this, against all the decisions, which were always against Egypt, we were the best team in the second half and on penalties.

“How can this referee, after what he has done in the past, be in the African Cup of Nations? Who understands this? Nobody!

“Caf doesn’t respect Egypt, from the timings [of matches] to the quality of the pitches. We had the worst pitches.”

The Egyptians are also upset that Senegal have an extra day to prepare for Sunday’s final, which pits Liverpool teammates Sadio Mane and Mo Salah against one another.

That is perhaps a more valid claim. Senegal played on Wednesday night and those extra 24 hours could make a big difference, especially if the decider goes to extra time.

Egypt have called for the game to be moved to Monday, something that will not happen, but by publicly airing these views they are making their point, and got in excuses early in the event of defeat.

“We are the only team that played 120 minutes in three consecutive games,” assistant coach Diaa El-Sayed said.

“I hope Caf would move the final from Sunday to Monday for the sake of fair play.”

El-Sayed backed Queiroz and De Sa, suggesting perhaps their sanctions were orchestrated against The Pharaohs.

“I believe Queiroz’s send-off was undeserved. I’d like to dedicate the win to him and his assistant, Roger de Sa. I don’t want to discuss refereeing mistakes or the things we suffered throughout the tournament. The players’ determination changes everything on the pitch.”

Egypt are chasing a record eighth continental finals win while Senegal, who were runners-up in 2019, are looking for their first.