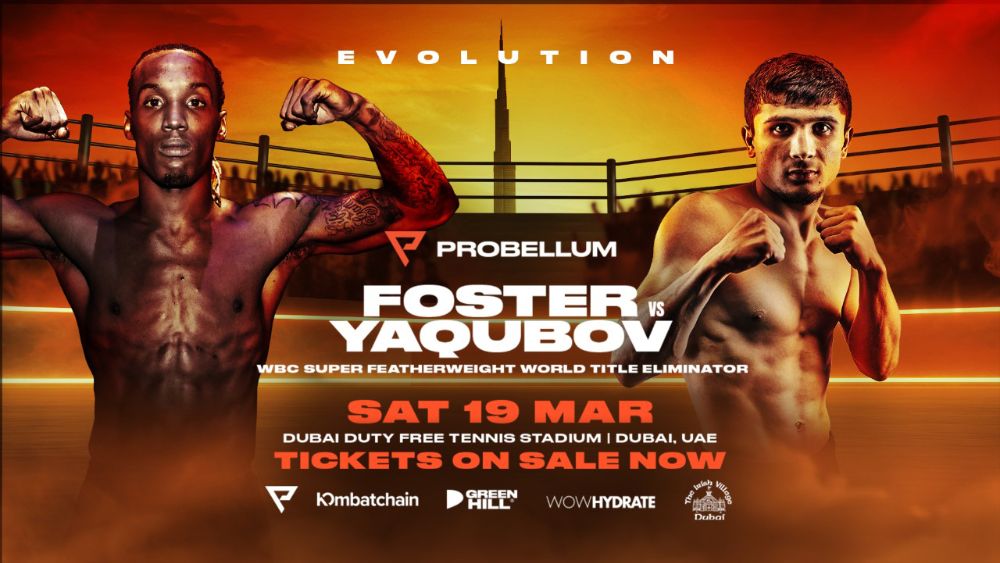 Probellum’s first event of 2022 takes place over the course of two successive nights at the Dubai Duty Free Tennis Stadium on March 18 and 19, with highly anticipated matches such as Sunny Edwards (17-0, 4 knockouts) versus Muhammad Waseem (12-1, 8 knockouts) and Regis Prograis (26-1, 22 knockouts) versus Tyrone McKenna (22-2-1, 6 knockouts) already confirmed.

Fight fans can now look forward to watching the USA’s Foster (18-2, 11 knockouts), who signed to Probellum in November, go head-to-head with undefeated Tajikistani Yaqubov (18-0, 10 knockouts) on the opening night of the event, which will be headlined by the Middle East’s first-ever all-female world title fight, between France’s Estelle Mossely (9-0, 1 knockout) and Argentina’s Yanina del Carmen Lescano (10-1, 2 knockouts).

Both Foster and Yaqubov have held their respective titles since 2018 and will now face off in a bid to become mandatory challenger for the WBC super featherweight world title, currently held by Mexican Oscar Valdez.

“This fight between O’Shaquie Foster and Muhammadkhuja Yaqubov is a fantastic addition to what was already a hugely exciting card,” said Richard Schaefer, President of Probellum.

“With the winner earning mandatory status, and a guaranteed shot at the WBC super-featherweight world title, there is so much at stake, and we are really looking forward to what promises to be a brilliant bout between these two talented boxers.”

Ticket prices start from 50 AED and are available to purchase now via Platinum List or in-person at The Irish Village, Al Garhoud and Studio City.