A multicultural display for the opening ceremony in Cameroon 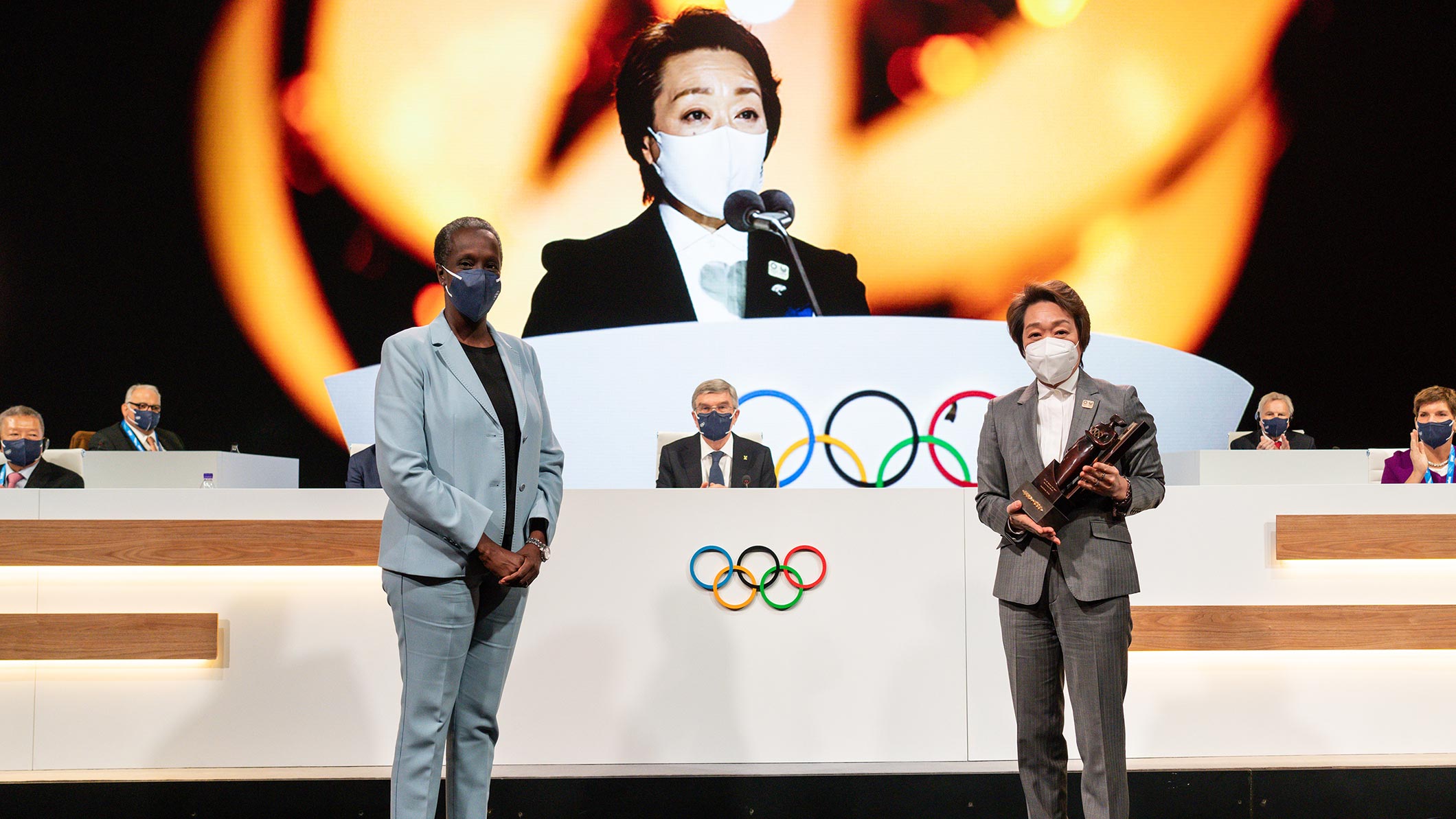 The International Olympic Committee (IOC) today announced the winners of the IOC Women and Sport Awards 2021. Delivered every year at continental and world level, the awards recognise exceptional men, women and organisations for their work in advancing gender equality on and off the field of play.

The World Award was presented to Tokyo 2020 President Hashimoto Seiko during the 139th IOC Session in Beijing. An experienced and prominent sports leader, politician, and seven-time Olympian, Hashimoto has disrupted and challenged many well-established gender norms in Japan to advance gender equality and inclusion in sport.

IOC President Thomas Bach and Chair of the IOC Women in Sport Commission Lydia Nsekera presented Hashimoto, who was present to deliver the final report on the Olympic Games Tokyo 2020, with her award. They also announced the continental winners.

Reflecting on the role of sport in advancing gender equality, President Bach said: “One of the highlights of the success story of the Olympic Games Tokyo 2020 was that these were the most gender-balanced Olympic Games in history. We, the IOC, could ensure this by allocating the respective quota and qualification systems. This gives me the opportunity to thank our International Federations for their great cooperation in achieving this milestone.

“This sent a powerful signal that the Olympic Games are always about bringing all people together without any discrimination: regardless of gender, race, background, religion or political belief. This commitment to inclusion and universality gives sport the power to challenge social norms and set the tone for social change. For all these reasons, a key mission of the IOC is to promote women in sport at all levels. Our focus is not only to advance gender equality on and off the field of play, but also to empower women and girls through sport. For over 20 years, the IOC Women and Sport Award recognises and celebrates the many people and organisations that help us realising this mission.”

Addressing Hashimoto, the IOC President explained that, with the unprecedented postponement of the Tokyo Games, “it needed someone like you to lead these Olympic Games to success. Someone with a proven track record of challenging the status quo. Fighting for gender equality. Pushing the boundaries for more inclusion. Shattering glass ceilings for more diversity. In other words, a true champion with an unwavering commitment to promote the Olympic spirit in everything you do.

“This is why I hope this award will put a spotlight on your important work to empower women and girls in and through sport. More importantly, I hope that this will only motivate you to continue to be a driver for change,” Bach added.

Receiving her trophy, Hashimoto said: “I have been committed to promoting gender equality throughout my career and it is an honour for me to see that these efforts are being recognised today with this Trophy. I will do my best to continue to contribute to the positive change in our society through the power of sport, and welcome your continuous guidance”.

Introduced in 2000, the IOC Women and Sport Awards celebrate remarkable role models and change-makers in advancing gender equality and inclusion. Each year, six trophies are awarded, one for each of the five continents and one at world level, in support of outstanding contributions to women’s and girls’ participation in sport.

A symbol of opportunity, recognition and empowerment, there have been 128 recipients from 67 countries across the world since the Awards’ introduction. The winners are also eligible for a grant to support and further their positive impact through projects aimed at advancing gender equality.

This year’s winners were selected from among 26 shortlisted candidates by the IOC Women in Sport Commission. The full list can be found here.

For more information on the winners, please click here.

For additional information about the IOC’s work to foster gender equality in and through sport, please click here.

President of the Tokyo 2020 Organising Committee and seven-time Olympian-turned-politician, Hashimoto Seiko has been advancing gender equality and inclusion in Japan for decades. A former cyclist and speed skater who competed at both Summer and Winter editions of the Games, Hashimoto’s experiences as an athlete have shaped her unyielding desire to better the futures of women and girls in Japan.

As a sports leader, Hashimoto advocated for greater support for female athletes and coaches and led the establishment of specific development and support programmes. As a politician, she was instrumental in creating a maternity leave policy and an in-house childcare facility for lawmakers in Japan.

After being appointed President of the Tokyo 2020 Organising Committee (OCOG), she took immediate steps to strengthen gender, diversity and inclusion, pledging that female empowerment would be promoted at the Games and beyond. She increased collaboration with Pride House Tokyo, the first permanent LGBTQ+ centre in the Japanese city, and doubled female representation on the OCOG Executive Board from 21 to 42 per cent.

Embodying the core values of Olympism, Hashimoto has shattered many glass ceilings throughout her career, and remains as committed as ever to improving the opportunities for girls and women in Japan both on and off the field of play.

Still only a teenager, and with limited resources, Natsiraishe Maritsa is using taekwondo to instil self-confidence and empower girls and boys in her community. Driven by the alarming number of child marriages in Zimbabwe, Maritsa founded the Vulnerable Underaged People’s Auditorium Initiative. This initiative uses her love of taekwondo to teach local classes and create a safe space for young people to share their concerns and experiences, and discuss issues such as child pregnancy and gender-based violence and harassment.

Nominated by World Taekwondo, which has partnered with the Zimbabwe Taekwondo Association and the Korean Taekwondo Promotion Foundation to send equipment and supplies to support her cause, Maritsa is far from finished in her desire to improve awareness and inspire change within her community and beyond.

A not-for-profit sport club in Harlem, New York, Figure Skating Harlem (FSH) has been combining the transformative power of sport with education to help girls of colour thrive and reach their fullest potential for the past 25 years. Its mission is to help young girls gain the critical academic, social and leadership skills needed to excel in their lives.

With the artistic discipline of figure skating at its heart and across its three programmes, FSH reaches more than 275 girls each year, about two-thirds of whom come from low-income families. More recently, Figure Skating Harlem has deployed its programmes in Detroit, to expand its reach and impact even further.

The first-ever Chinese female world champion in the freestyle wrestling 53kg category, Zhang Xia has since gone on to be a National Coach, an International Technical Official and prominent administrator within the sport, winning the Olympic Referee Golden Whistle Award in 2008. As President of the Chinese Wrestling Association, Zhang led several initiatives to increase the number of female technical officials and coaches in the sport of wrestling.

More recently, Zhang was appointed as President of the Capital University of Physical Education and Sport in Beijing, which hosts the Beijing Institute for International Olympic Studies (BIIOS), a part of the global network of Olympic Studies and Research Centres (OSRC). Zhang plans to leverage this position, as well as her current role as a United World Wrestling Bureau member, to support and mentor women in administrative and leadership structures, and to empower female officials.

Kari Fasting has been a leading voice in the gender equality in sport movement for over 40 years, jointly founding Women Sport International and Safe Sport International. An esteemed and highly sought-after professor in sports science, her findings have been shared globally, helping to change and challenge the sporting landscape around the world.

Fasting continues to share her research, conduct presentations and provide expert advice to sports organisations around the world, to help them establish policies and procedures for safeguarding and develop gender equality action plans that go beyond one-off projects and have a long-lasting impact.

Tracey Holmes has worked tirelessly to normalise women in sport through the media throughout her career. In 1989, she created and produced a 15-minute weekly programme called “Women in Sport” that exclusively reports on women’s sport at a time when there was little-to-no coverage, greatly helping to build a platform for women’s sport and bring such stories to more mainstream programming.

More recently, Holmes has been involved in several mentoring programmes aimed at growing the number of female sports journalists, including the Women in News and Sports (WINS) and the IOC Young Reporter Programmes.