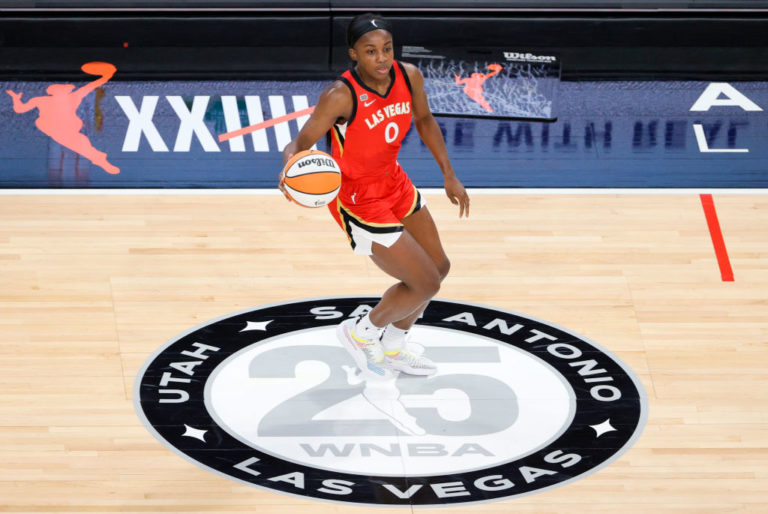 LAS VEGAS, NEVADA - JULY 04: Jackie Young #0 of the Las Vegas Aces brings the ball up the court against the Atlanta Dream during their game at Michelob ULTRA Arena on July 4, 2021 in Las Vegas, Nevada. The Aces defeated the Dream 118-95. NOTE TO USER: User expressly acknowledges and agrees that, by downloading and or using this photograph, User is consenting to the terms and conditions of the Getty Images License Agreement. (Photo by Ethan Miller/Getty Images)

The WNBA announced on Thursday a capital raise it called the largest-ever for a women’s sports property and plans to put it toward brand elevation and marketing, among other targets.

Cathy Engelbert told reporters it was raised by selling equity in the league and totals $75 million. Per Just Women’s Sports’ Hannah Withiam, the valuation comes to $1 billion.

The investors include individuals new to the league, current WNBA and NBA team owners and inaugural WNBA Changemaker Nike.

“Our strategy is to deploy this capital to continue to drive the league’s brand as a bold, progressive entertainment and media property that embodies diversity, promotes equity, advocates for social justice, and stands for the power of women,” WNBA commissioner Cathy Engelbert said in a league release. “Having just completed our historic 25th season, with this access to additional capital, we are setting the WNBA up for a successful future and it represents a sign and signal of the future direction of women’s sports as a whole.”

Engelbert’s background is 33 years at Deloitte, where she worked as CEO for four years before joining the WNBA. She’s used those connections and knowledge to continue generating new revenue and transforming the business model of the league.

“We’ve all seen the reports of less than 5% of all sports media coverage and less than 1% of all sponsorship dollars go to women’s sports, so access to this capital as you know when you’re trying to grow a business, is really going to help us move the needle,” she said Thursday on CNBC’s “Squawk Box.”

Nike made a “significant equity investment” in the league that will “elevate the marketing and stoytelling of WNBA athletes,” per the league’s release. Nike unveiled three new jerseys for each teams last season, including a Nike Heroine Edition.

“The NBA also had a growth process. And I think in today’s society, we expect for everything to happen right now,” Cash, the New Orleans Pelicans vice president of basketball operations, said on Squawk Box. “But you have to have execution, you have to have a vision.”

Engelbert has spoken about the league’s marketing problem since she took the job in July 2019. It’s a multifaceted issue that expanded out includes lack of merchandise, year-round storytelling and consistent TV scheduling.

Infusing money into those aspects of the game will further boost the league as it continues to experience growth in factors often cited for it, such as TV viewership. That will in turn help as the league looks toward expansion in both teams, rosters sizes and decades down the road even a G League-type property. Engelbert has often repeated the league needs to expand in a smart manner and be financially ready to do it. This money could help that.

The 2020 collective bargaining agreement was a big step forward for the league and its players, but there is still significant work to be done. Travel is often an issue, and became another talking point this week after free agent Liz Cambage noted salary disparities between players and coaches.

It is easy to forget the WNBA is relatively young, having celebrated 25 seasons in 2021. It is the longest-running professional women’s sports league in the U.S., but trails men’s professional sports teams by decades. It even lags behind women’s professional basketball in other countries that are paying players by the millions.