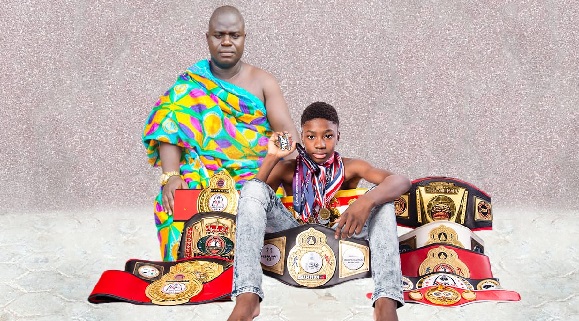 US-born Ghanaian fighter, Joseph Awinongya Jr, is expected to arrive in the country for the first time on February 6 as he looks to undertake a number of projects in Ghana.

The 14-year-old juvenile boxer will be making the trip to Ghana in the company of his father Joseph Awinongya Sr – a former professional boxer who fought in the US.

Ahead of his arrival, Nii Annang Adzor II, Paramount Chief of Ashaiman, a community where young Awinongya Jr’s father grew up, said he was ready to support the youngster’s career to help him achieve greatness.

Nii Adzor II described Awinongya Jr as a young talent with great ambition who he believes would be a motivation to the people of Ashaiman.

“Ashaiman is a fertile ground which keeps producing talents and prominent men and women in the country. It comes as no surprise the exploits of this young boy,” Nii Adzor II said when some family members and relatives of Awinongya Jr in Ashaiman paid a courtesy call to inform him of the fighter’s homecoming.

“Looking at his achievements, Joseph Awinongya Jr is going to be a role model to the young people of Ashaiman. The stool will give him all the support he needs and call all the tribes here in Ashaiman to support him as well.”

As part of his activities in Ghana, the young boxing sensation will pay a courtesy call on the Minister of Youth and Sports, Mr Mustapha Ussif to introduce himself to the sporting fraternity in the country.

The meeting with the Minister is also expected to discuss boxing exchange program between USA Boxing and the Ghana Boxing Federation.

He will also meet the likes of the National Chief Imam, Sheikh Osman Nuhu Sharubutu, Alhaji Inussah Sally, and many others.

The youngster, who hails from Bongo in the Upper East Region, won gold at the Junior Olympic National Championship in 2021 and at his age, has 13 national titles to his credit.

In 2017 and 2018, he won the National Silver Gloves championship and took the USA Nationals and the National Olympic Tournament.

Known as Jojo, the fighter is ranked number seven in the US but the most exciting young boxer is coached and trained by his dad.

He is known for his generosity to the needy in society and has received praises from some prominent people in Ghana.