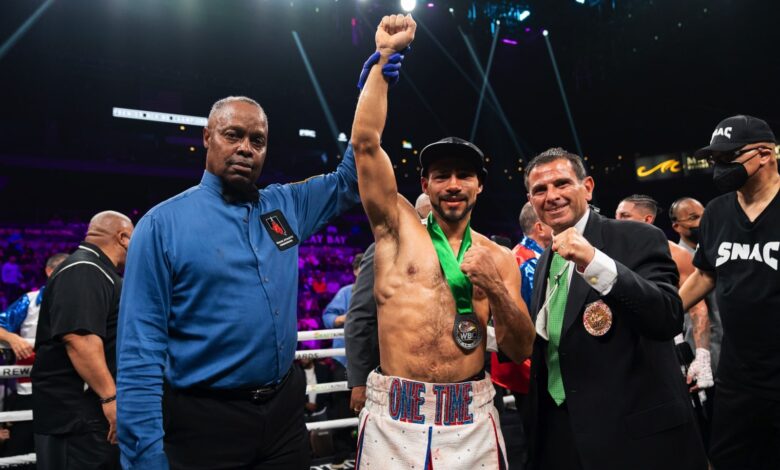 Keith Thurman is back, and “One Time” instantly reinjected himself into the top-tier conversation of the welterweight division.

Thurman delivered an impressive unanimous decision victory over a game, Mario Barrios, at the Michelob Ultra Arena in Las Vegas, and live on pay-per-view, Saturday night. Judges scored it 117-111, 118-110 and 118-110 for Thurman, who bounced back from suffering his first pro loss at the hands of Manny Pacquiao back in July 2019.

The 33-year-old Thurman’s confidence was riding high after dominating a tough 26-year-old Barrios.

From the opening bell, Thurman showed swift movement and patience as he used plenty of veteran savvy to pick his punches, landing clean shots with sting.

One of his best weapons of the night was a lunging left hook that he used to wobble Barrios in the third and fourth rounds.

Thurman’s main hiccup of the night came in the eighth round when Barrios caught him with a body shot, prompting “One Time” to remove his mouthpiece in a move we’ve seen from him before when getting hit in the midsection.

Although Thurman’s movement considerably slowed down from that point onward, he relied on his ring IQ enough to still pepper the younger fighter with punishing shots. He also finished the bout strong by producing a fight-high 70 punches in the 12th round as he staggered Barrios yet again — this time with a right hand — to help punctuate his victory.

“I still felt a little ring rust in there, but it was amazing,” Thurman said. “I grade this one a C+, B- for myself.”

If Thurman can shore up vulnerability to the body attack, one would think he could at least make a legitimate final push to try to reign as welterweight champion once again.