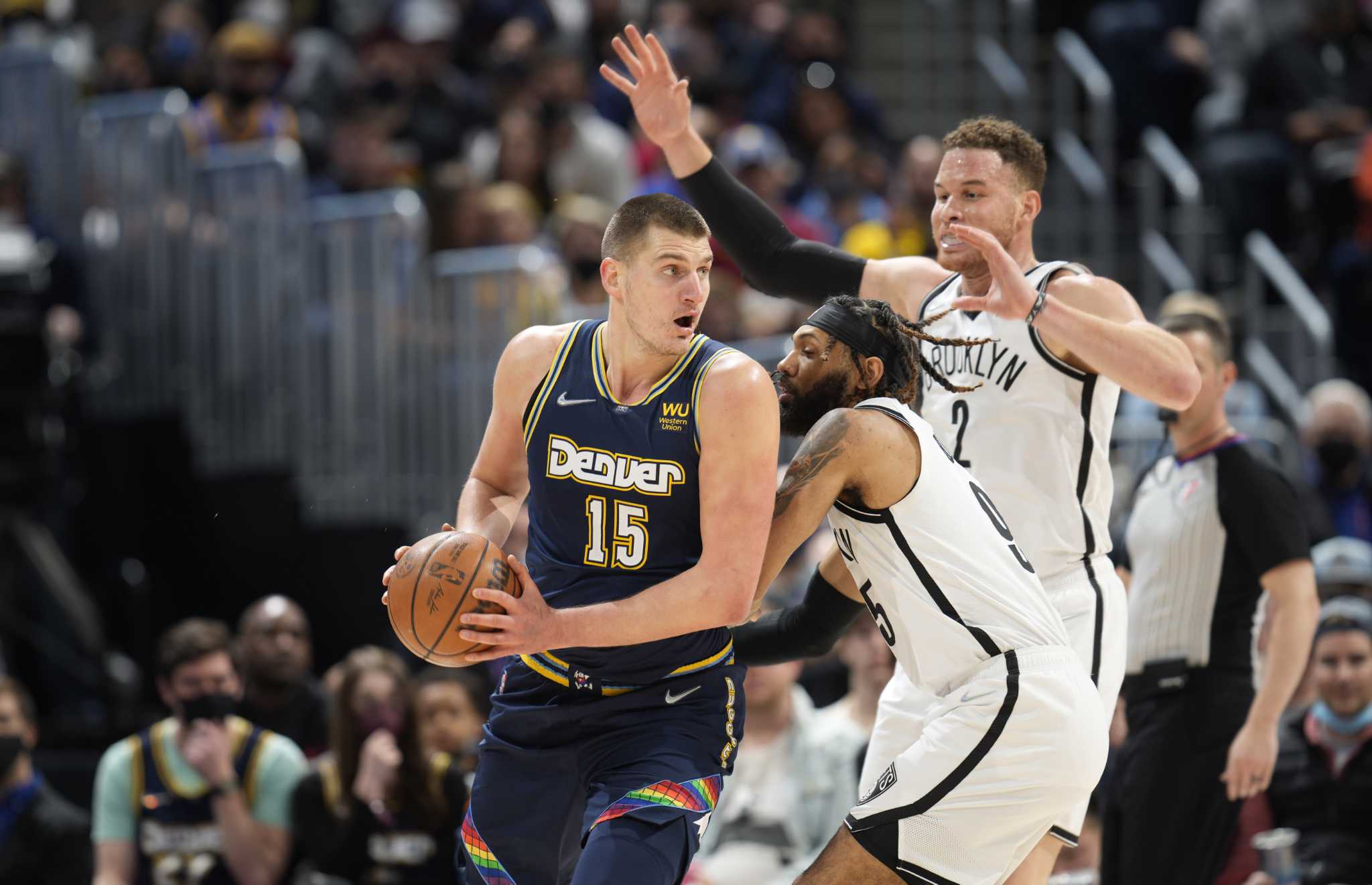 It has taken the Nets just two weeks to go from first place to free fall, from atop the East into the play-in.

Just think how far they can drop in another couple of weeks.

The Nets rolled over Sunday in a 124-104 loss to the Nuggets before 18,241 at Ball Arena, competing for the first half before they capitulated in the second.

Within a point at halftime, the Nets surrendered a 29-9 run coming out of intermission and suffered their league-worst eighth straight loss to tumble into seventh place, behind Toronto and in the play-in spot.

The Nets (29-24) played without James Harden, Kevin Durant, Nic Claxton, LaMarcus Aldridge and Joe Harris. Harden is being linked in rumors leading into Thursday’s deadline, while the Nets are just 2-9 since Durant got hurt Jan. 15.

“First things first is getting healthy, and then setting our team up for the rest of the season post this trade deadline,” said Irving, who teased the chance he could play home games. Asked if they’d have fewer distractions after the deadline passes, he replied, “We’ll see. Just got to keep our heads on straight right now.

“There’s some frustration that’s lying in there, but we just made some jumps and some step-backs. That’s part of being in the NBA, growing and learning.”

Irving — barred from playing home games because he’s unvaccinated — had 27 points and 11 assists. Rookie Cam Thomas scored 19 points and Griffin continued his recent resurgence with 19 points on 5 of 7 from deep.

DeAndre’ Bembry (three blocks, two steals) did give Brooklyn an early lift with his defense. He blocked DeMarcus Cousins sailing in for a dunk, and seconds later his swipe of a Bones Hyland pass led to a Patty Mills layup and 48-43 lead.

The cushion reached 65-58 when Irving found Griffin for a step-back 3 with 4:43 left in the half. But Brooklyn allowed a 14-3 run, including the first seven points unanswered.

At 35, ex-Net Jeff Green beat his former team downcourt for a tying dunk. Then Jokic’s finger roll put Denver ahead 72-68 with 1:58 remaining in the half.

Brooklyn trailed 76-75 going into the locker room, only the second time in franchise history that saw both teams score 75 points in the same half. But the third quarter was nowhere near that close, as Denver stormed out of the locker room on a 12-2 run.

“We stopped playing the same basketball that got us the lead,” said Griffin. “They made some defensive adjustments, and we just fell into it.”

When Aaron Gordon threaded a perfect bounce pass to Jokic the lead reached 83-77. And after Kessler Edwards got blocked at the rim by Will Barton, Gordon found Jokic again to make it 88-77 with 7:02 left in the third.

The extended run eventually reached 29-9, when Gordon’s free throw pushed it to 105-84 with 54 seconds to play in the third. The rest was garbage time.

With the Nets on an eight-game slide — their worst since Nov. 21-Dec. 5, 2018 — they return home Tuesday versus the Celtics, starting a stretch when Irving will be ineligible for five of the next seven.

When asked if he thought New York’s vaccination mandates might change, he said, “Who knows? I know it’s not a laughing subject to be talking about, but who knows what could happen?”

After Irving was asked if he’d been in contact with city officials, he joked, “I’ll be talking to the city the day after today. No, I’m just playing. I’m keeping a positive mindset that anything can happen these next few days and the next week, and just crossing my fingers that something can come up either before All-Star break or even just after. So I’m definitely keeping a positive attitude in that sense.”