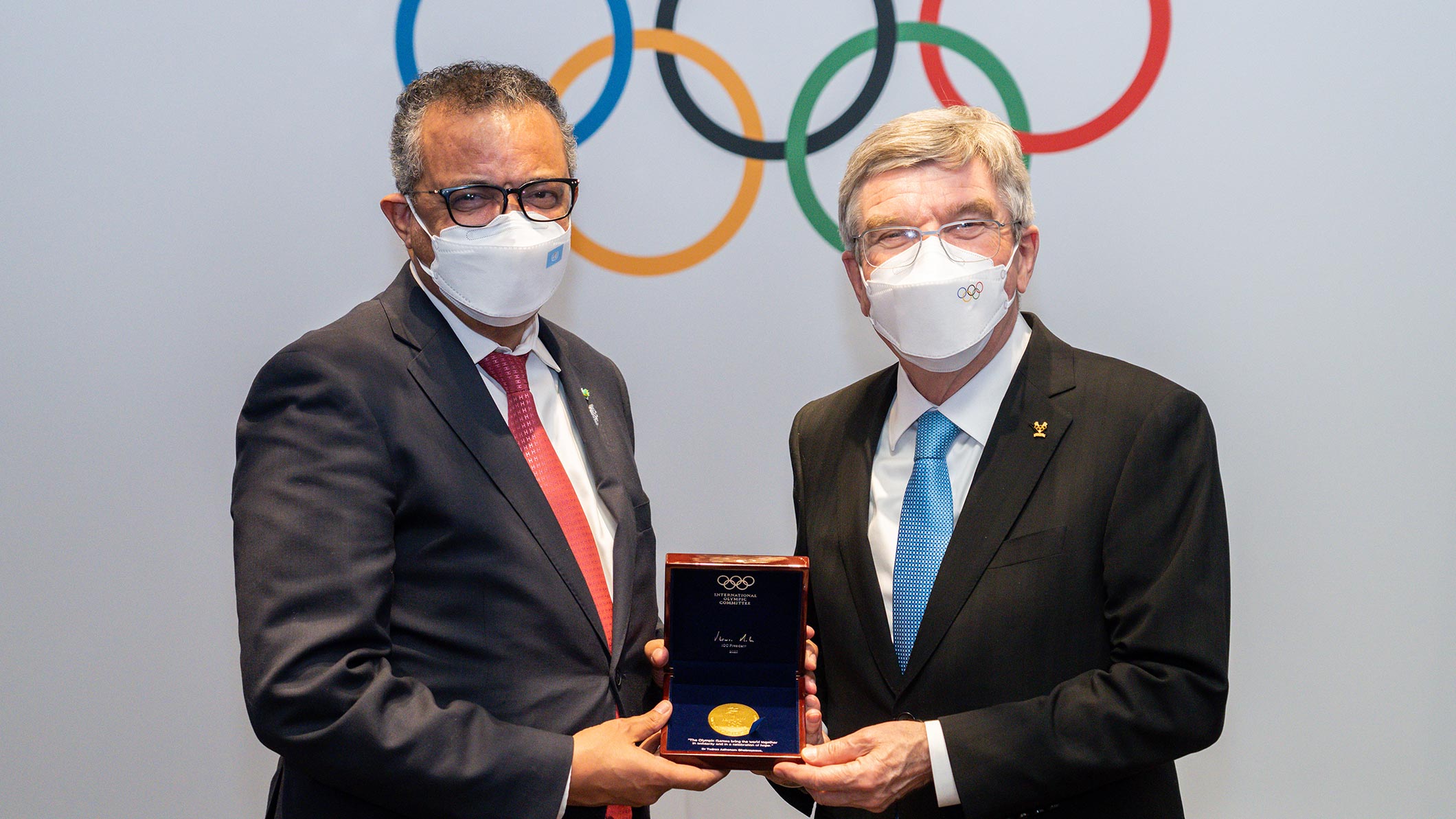 The meeting took place after the WHO Director-General ran with the Olympic torch on the day of the Opening Ceremony, and said: “The Olympics are about, hope, solidarity, unity and peace. Especially hope to end this pandemic. I hope we will achieve the 70 per cent vaccination in each and every country around the world by mid this year, and hope the acute phase of the pandemic will be over, so that people will come together like always.”

During the meeting, the IOC President reaffirmed the IOC’s support for this desire of WHO: “We have been given a way forward with a safe and effective vaccine that can help save precious lives,” Bach said. “Let us all join hands in giving free and equal access to the vaccine for everybody across the world to pledge our collective responsibility to protect those who are the most vulnerable, because everyone on this planet has a right to live a healthy life. We are stronger together when we stand in solidarity and care for each other.”

The IOC and WHO formalised their collaboration to promote public health with a Memorandum of Understanding in 1984. The partnership has grown since then, resulting in a series of projects promoting grassroots sport and healthy lifestyles for all, and leveraging WHO expertise in health emergencies, mass gatherings and water quality in the context of the Olympic Games. The two organisations signed a new Cooperative Agreement in 2020 to strengthen and expand on these dimensions.

On Olympic Day in June 2020, the IOC, WHO and the United Nations (UN) joined forces against the pandemic with the help of athletes. The “Healthy Together” partnership co-signed by the UN was built on the need for collective action to reduce the spread and COVID-19. The IOC helped to further bring that commitment to life last month by releasing a video that uses the persuasive power of athletes to encourage vaccination. More than 20 Olympians and Paralympians called on world leaders and decision-makers to ensure free and equitable access to COVID-19 vaccines, and widely shared the video on social media.

WHO experts were also involved in developing the COVID-19 countermeasures that were successfully applied last summer at the Olympic Games Tokyo 2020, an event that became a template for other large-scale events. The global health agency worked with the IOC again during the preparations for Beijing 2022 in the challenging context of the more transmissible Omicron variant.

The COVID-19 pandemic has shown how crucial sport and physical activity are for physical and mental health. The IOC has been regularly calling on the world’s governments to include sport in their post-crisis support programmes, because of the important role of sport in the prevention and recovery phases.

The IOC President and the WHO Director-General also discussed a range of other mutual projects and closer collaboration on sport for health for future Games, starting in Paris 2024, to address emerging issues such as the prevalence of non-communicable diseases, which are often closely linked to unhealthy lifestyles and a lack of physical activity. WHO estimates that non-communicable diseases kill 41 million people annually and account for 71 per cent of all deaths around the world.