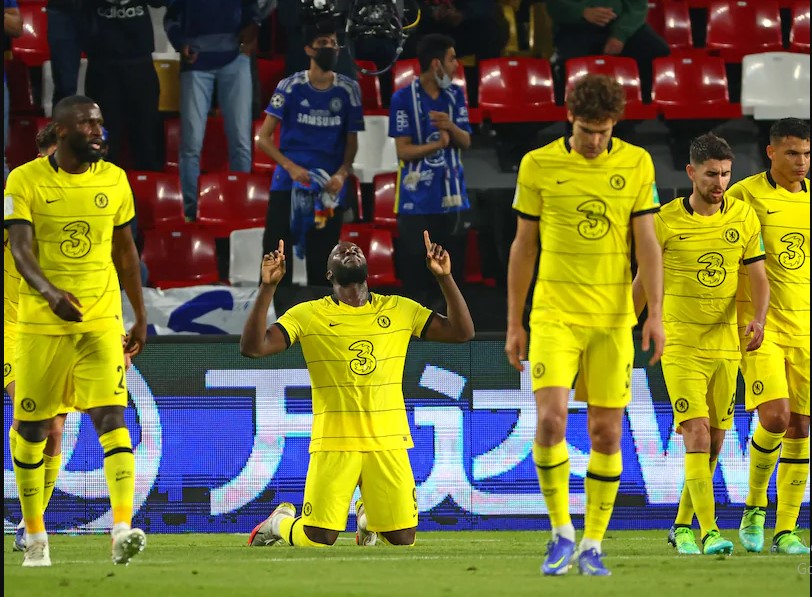 Chelsea will face Palmeiras in the Club World Cup final on Saturday after they beat Al Hilal 1-0.

After dominating for most of the first half, Romelu Lukaku gave the Blues the lead just after the half hour mark with his close range tap in.

Despite some pressure from Al Hilal in the second half, Chelsea were able to see out the game and win in Abu Dhabi.

Kai Havertz, who scored the winning goal in Porto in the Champions League final, started up front for the Blues, with Mateo Kovacic and Jorginho partnering in the midfield.

Chelsea started the game with good spells of possession as they looked to find their feet in the match.

From the outset it looked as though Lukaku and Havertz were playing as the two up top, with Hakim Ziyech sitting in behind them in attack.

Thiago Silva had their first real chance of the game, but his effort from range was wide of the goal.

Ziyech was next to have an attempt for the Blues but his strike went narrowly over the bar.

Jorginho then had his shot blocked by the Al Hilal defence as the European Champions stepped the pressure up.

Lukaku then had an attempt from a tight angle but the offside flag was soon raised.

The Belgian then had a glorious chance to take the lead, but he missed from close range from Cesar Azpilicueta’s cross.

Ziyech soon played a great ball to the striker but he lost possession after cutting it onto his right foot when he maybe should have shot with his left.

Silva was called into action for Chelsea as he headed away a dangerous cross.

Lukaku had another chance to score once again as Kovacic played him through, but his shot was saved by the goalkeeper.

Finally he did get onto the scoresheet in the 31st minute and made it 1-0 to Chelsea!

Havertz worked really well on the left hand side and his cross was headed down into the path of his striking partner, who lashed in from close range.

Since the goal, the game quietened down and Chelsea enjoyed the remaining minutes of the first half.

Ziyech soon had two more chances of his own to score and make it 2-0, but they were both blocked.

Marcos Alonso fired a shot over the bar and the referee soon blew the whistle for half time.

N’Golo Kante replaced Jorginho in the Blues’ midfield at the start of the second half.

Havertz very nearly doubled his side’s lead but he hit the post from a tight angle after a great bit of skill.

Al Hilal soon had a chance for themselves but Mohamed Kanno fired the ball over.

There were calls for a Chelsea penalty as Andreas Christensen was wrestled down in the box but nothing was given.

Odion Ighalo had a chance to equalise for Al Hilal but Silva did well to block the shot.

Ziyech had yet another chance to score for Chelsea but his volley was saved by the goalkeeper after some nice build up play.

Kepa Arrizabalaga made a massive save to deny Marega to keep his side in the lead.

After a spell of possession from Al Hilal, the Blues soon went on the attack as Havertz saw his header from a corner saved.

Kepa was called into action once again as he made a superb save to deny Kanno’s effort from range.

Mason Mount was the net Chelsea substitute, replacing Ziyech in the Blues attack.

The Cobham academy product soon saw his cross head towards the near post but it was saved by the goalkeeper.

Mount then saw his effort from Lukaku’s pass blocked and deflected wide of the goal.

Malang Sarr was the next player to come on for the Blues as he replaced Marcos Alonso as the clock ticked down.

The Blues played out the final few minutes with relative ease.

Soon enough, the referee blew for full time and Chelsea will now face Palmeiras in the Club World Cup final on Saturday.