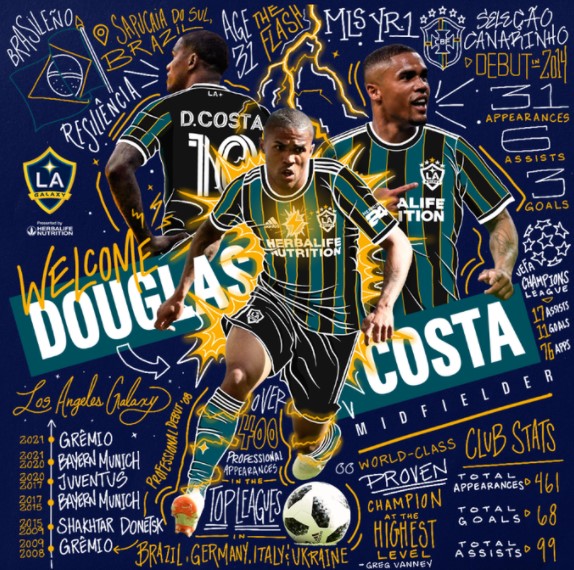 The LA Galaxy have acquired Brazilian winger Douglas Costa on a six-month loan from Juventus (via Gremio), the club announced Thursday. Upon the loan and his contract with Juventus expiring this summer, Costa has already agreed to a new deal with the Galaxy through the 2023 MLS season.

Costa, 31, will be a Designated Player for LA. The deal was first reported by MLSsoccer.com.

Costa has made 31 appearances for the Brazilian national team, part of their 2018 World Cup team that reached the quarterfinals. He has also represented two of Europe’s biggest clubs in Bayern Munich and Juventus, winning three Bundesliga titles and a further three Serie A crowns.

“Douglas is a world-class player and a proven champion at the highest level. His capacity to create and finish will add yet another level to our attack,” head coach Greg Vanney said in a release. “We are excited to integrate him into the team as we push toward the start of the season.”

The winger, known for his electric technical ability, will be the Galaxy’s third DP alongside forwards Javier “Chicharito” Hernandez and Kevin Cabral. The Galaxy also have all three U22 Initiative slots filled via forward Dejan Joveljic, midfielder Efrain Alvarez and defender Julian Araujo.

Costa had three goals and two assists in 26 appearances with Gremio as they were relegated after the 2021 Brazilian Série A campaign. It was the first season he played more than 1,000 league minutes since 2017-18 with Juventus, when he had four goals and 12 assists.

Prior to Bayern and Juventus, Costa made his first foray in Europe with Ukraine’s Shakhtar Donetsk after making his professional debut for Gremio in 2008.

“Douglas is an exceptional talent who has played at some of the biggest clubs in the world,” technical director Jovan Kirovski said in a release. “He is a big addition to our team, and we believe he will be a difference-maker in MLS.”

The Galaxy have been busy this winter, adding the likes of Raheem Edwards, Mark Delgado and Kelvin Leerdam via intra-league moves while re-signing veteran midfielders Victor Vazquez and Sacha Kljestan as they prepare for year two under head coach Greg Vanney.