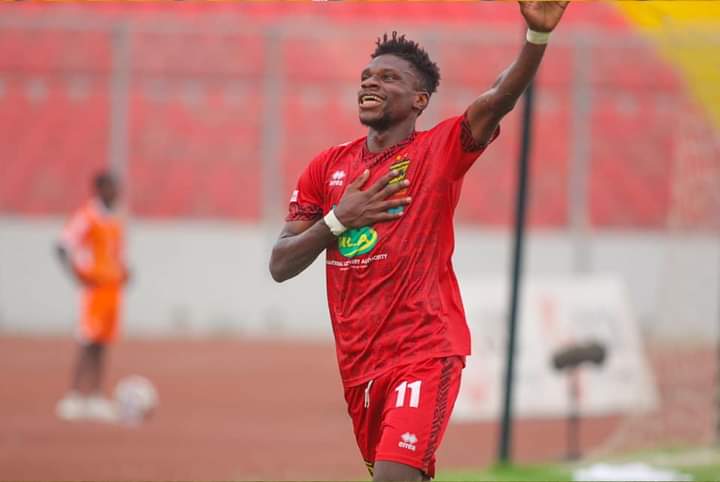 Frank Mbella scored his second hattrick of the season as Asante Kotoko eased past Accra Lions 3-1 on Saturday.

The Porcupine Warriors returned to winning ways after losing to Elmina Sharks on match day 16.

The Cameroonian import delivered a man of the match performance to help the Asante Kotoko extend their lead on top of the table.

Defender Imoro Ibrahim and Georges Mfegue were ruled out due to suspension while Mudasiru Salifu sit out of the game due to ill health.

Samuel Boateng, Justice Blay and Patrick Asmah were named in the starting line up by Coach Dr Prosper Nartey Ogum.

Frank Mbella scored the first goal of the game in the opening minutes after he pounced on a goalkeeping error.

Mbella registered his 10th goal of the season in the 44th minute from the penalty spot after he was fouled by the Accra Lions defender.

Kelvin Kyei pulled one back for the visitors before the half time break.

Asante Kotoko continued with their dominance in the second half as they created a lot of scoring opportunities for the third goal.

Mbella registered his third goal of the afternoon in the 84th minute to secure the win for the Porcupine Warriors at the Baba Yara Sports Stadium.

The Cameroonian forward was adjudged Man of the Match after the game and also received the match ball.