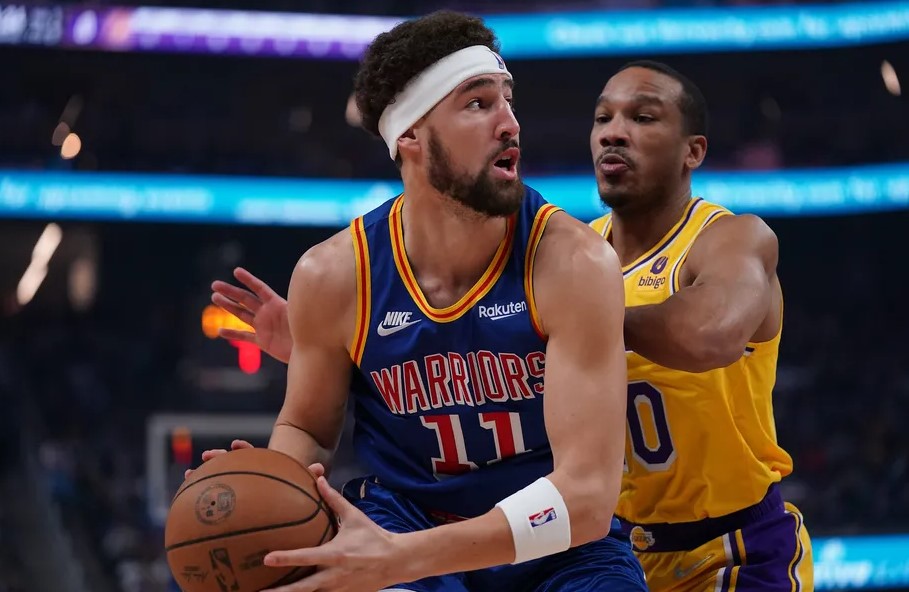 The Golden State Warriors got back on track in a 117-114 victory over the Los Angeles Lakers. Entering play on Saturday with a two-game losing streak, the Warriors took advantage of a top-heavy Lakers roster

Rookie Jonathan Kuminga stood out early. He beat the Lakers downcourt multiple times in transition and continued showing how lethal he can be in the half-court, cutting behind his defender when they are distracted with a Dub shooter. Andrew Wiggins and Stephen Curry got out to similarly strong starts offensively, and the Warriors were quickly ahead. That trio combined for 23 of the Warriors’ first 26 points. At the end of the first quarter, Golden State led 32-26.

Defensively, the Dubs were far from their best selves. Their recent struggles on the defensive glass reemerged at seemingly the worst times and their inability to get hot from three prevented them from pulling away. The Warriors finished 12-for-38 (31.6%) while the Lakers shot 11-for-27 (40.7%) from three. However, Golden State’s porous interior defense made it easy for LA to find easy shots inside early that set up their three-point barrage.

The Warriors led 65-62 at the half. LeBron James had kept the Lakers within striking distance, recording 18 points, 7 rebounds, and 4 assists in the first half. For the Warriors, Curry had 17 points and 4 assists by halftime while Kuminga and Andrew Wiggins both had reached double figures. It marked a new piece of history for Kuminga:

Golden State stretched their lead to nine in the third quarter, but the Lakers immediately began regaining ground as soon as the Dubs took Curry off the floor. Despite James sitting on the bench, the Warriors missed several open threes and the Lakers continued dominating inside. In the span of a few minutes, an offensive rebound by Malik Monk set up Talen Horton-Tucker for a wide-open three that put the Lakers ahead 88-87.

Jordan Poole answered with his best stretch of the game, scoring five of his 11 points in the final 80 seconds in the quarter. Heading into the fourth, the Warriors led 95-94.

With James back on the floor, the Lakers started the fourth quarter on a 7-0 run. Now playing from behind, the Dubs needed to rekindle their early-game offensive punch. After Curry started the quarter though, head coach Steve Kerr took him out with 6:52 remaining for a quick breather, they needed something from somebody else.

Wiggins delivered an incredible block on James that set off a game-changing series of events. Lakers head coach Frank Vogel was called for a technical foul on the ensuing possession. Poole knocked down the free throw and Thompson made a mid-range jumper. Then after James missed a three on the other end, it was the Warriors who benefitted from a second-chance opportunity. Kevon Looney grabbed an offensive rebound off a missed three by Wiggins and he found Thompson who knocked down another jumper.

With 5:49 left in regulation, the game was tied at 103. Most importantly, when Curry returned a minute later, it was just a two-point game.

Thompson had his highest-scoring performance since his return. He scored 13 of the Warriors first 14 points in the fourth quarter and finished with 33 points. While Curry carried the Warriors up to that point (he finished with 24 points, 5 rebounds, and 8 assists), it was his Splash Brother who kept the Warriors alive. Then, leading by one in the final minute, Steph made a finger-roll layup to put Golden State ahead 117-114 with 46 seconds left.

James missed a layup on the Lakers’ ensuing possession. The Warriors milked the clock as much as they could before Curry launched a deep three that bounced off back iron and into Russell Westbrook’s hands, which left the Lakers 7.3 seconds.

In the final seconds, the Warriors opted not to foul at first and Curry fouled James as he went up for a three-point shot. James missed the first free-throw, which meant he could not tie the game. He made the second to bring the Lakers within two, missed the third, and came away with an offensive rebound, but the clock expired before he could get a shot off.

While Anthony Davis and Westbrook had some flashes throughout the game, this was James’ game. LeBron was relatively inefficient, shooting 9-for-27 from the field, but he recorded 26 points, 15 rebounds, and 8 assists. Westbrook and Davis combined for 35 points, 14 rebounds, and 9 assists. Monk and Horton-Tucker each finished 5-for-9 from the field and added 29 combined points off the bench.

The Splash Brothers ultimately led the Warriors to victory, but the early-game contributions of both Kuminga and Wiggins should not be discounted. On a day when the Dubs only got 3 points from Kevon Looney and 9 points from bench players other than Poole, the Warriors’ two starting wings needed to have solid performances. Kuminga’s 18 points and 9 rebounds alongside Wiggins’ 19 points and 5 rebounds were pivotal for the Dub’s path to victory.

The Warriors will travel down to Southern California in a couple of days for their next game. They will face the Los Angeles Clippers in the former Staples Center on Monday, February 14th