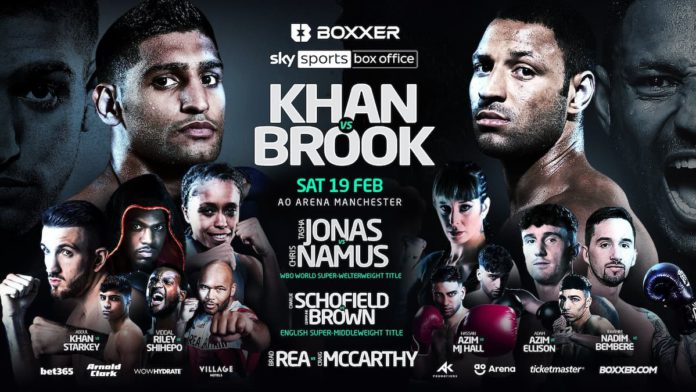 Former world champions Amir Khan and Kell Brook battle it out live from AO Arena in Manchester, England on Saturday, February 19. The pair squares off in the twelve-round 149-pound all-British showdown.

Khan (34-5, 21 KOs) makes his first appearance inside the squared circle since July 2019, when he stopped Billy Dib in the fourth round. Earlier the same year he challenged Terence Crawford for WBO welterweight title, but was stopped in Round 6.

Brook (39-3) last fought in November 2020, when he tried to dethrone “Bud”, but fell short suffering the defeat via fourth-round TKO. Prior to that he secured three straight victories stopping Mark DeLuca and Sergey Rabchenko, and earning a UD against Michael Zerafa.

In the co-main event Natasha Jonas and Chris Namus contest for WBO super welterweight title. Among other bouts featured on Khan vs Brook undercard, Charlie Schofield faces Germaine Brown for British super middleweight belt, and Bradley Rea takes on Craig McCarthy at middleweight. In addition, Viddal Riley meets Willbeforce Shihepo at cruiserweight. The full lineup can be found below.

Tickets for Amir Khan vs Kell Brook at AO Arena in Manchester, England on Saturday, February 19 are on sale. Tickets can be purchased through StubHub and Ticketmaster.

How to watch Amir Khan vs Kell Brook live stream, date and time

Boxing fans can watch Amir Khan vs Kell Brook live stream on Sky Sports in the United Kingdom and ESPN+ in the United States. The start time is scheduled for Saturday, February 19 at 6 pm GMT and 1 pm ET / 10 am PT, respectively.

International broadcast, including Australia, is expected on FITE TV – subject to confirmation.

A pair of events have been scheduled for Khan vs Brook Fight Week.

The current Khan vs Brook fight card looks as the following: